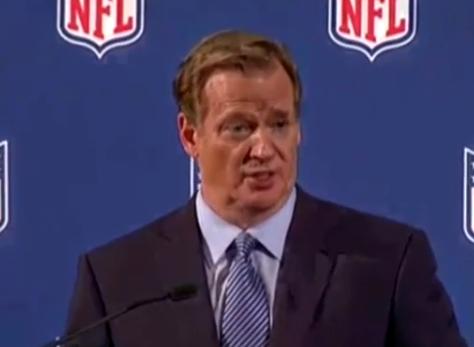 NFL Commissioner Roger Goodell is holding a press conference today to speak about the recent Ray Rice domestic violence incident, the Adrian Peterson incident, and how they plan to handle these type of issues moving forward. There were many who were saying Goodell should resign if he knew what really happened in that elevator. Goodell will address these concerns and much more, and will field questions from the media.

Goodell says, “I have not (considered resigning)”.

Says new developments in Ray Rice incident is different from what he was originally told what happened by Rice.

“We made a mistake in letting our standards fall below where they should be.”

Goodell believes no one in his office saw the full Ray Rice video before it surfaced on TMZ. Investigation still ongoing.

There will be a new NFL personal conduct committee; goal is to have it in place by Super Bowl.

** This happened: Watch some guy freak out screaming “Don’t take me to an elevator” over and over as he’s escorted from the press conference. WTF?  (watch below)**

Goodell has no qualms about Robert Mueller heading up their independent investigation, even though they have hired the law firm he works for in the past. Goodell pointed out they had also been sued by people hiring the same law firm.

Goodell could not explain how TMZ got the whole Ray Rice video with one phone call, and they [the NFL] allegedly could not get it.