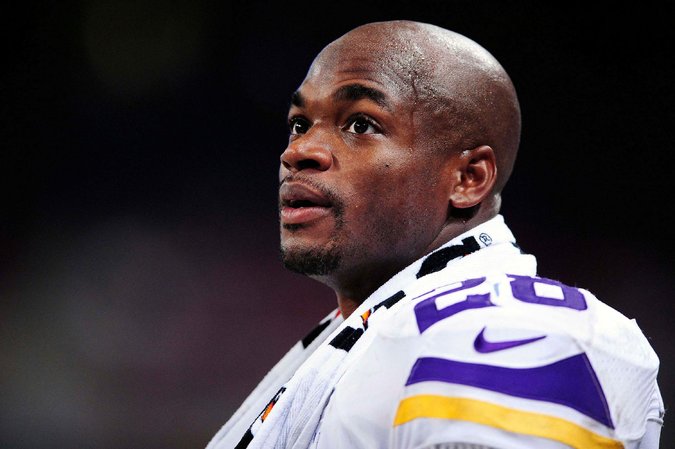 All pro Minnesota Viking running back Adrian Peterson didn’t play with his team on Sunday when they go demolished by the New England Patriots due to turning himself in on grand jury charges of reckless or negligent injury to a child. The charges stem from Peterson disciplining his four year old son with a small tree branch earlier this year that left marks/cuts on the child. However, Peterson has been activated and will be eligible to play when the Vikings take on the New Orleans Saints this weekend.

Peterson could face up to two years in prison and a $10,000 fine if found guilty on the charges.

Peterson spoke on the charges:

“I have learned a lot and have had to reevaluate how I discipline my son going forward,” Peterson said in the statement. “But deep in my heart I have always believed I could have been one of those kids that was lost in the streets without the discipline instilled in me by my parents and other relatives. I have always believed that the way my parents disciplined me has a great deal to do with the success I have enjoyed as a man. I love my son and I will continue to become a better parent and learn from any mistakes I ever make.

“I am not a perfect son. I am not a perfect husband. I am not a perfect parent, but I am, without a doubt, not a child abuser. I am someone that disciplined his child and did not intend to cause him any injury. No one can understand the hurt that I feel for my son and for the harm I caused him. My goal is always to teach my son right from wrong and that’s what I tried to do that day.”

I can say that I received the same type of discipline from my parents and grandparents. I don’t know if it’s a ‘south’ thing, but it definitely is something that was common among my peers and the way their parents disciplined them. Was I physically abused? Probably if we go by the contemporary definition, but I wouldn’t have had it any other way.

Do you ‘whip your children’ with a belt or small tree branches, or do you refer them to timeout instead? Maybe you do both?

Personally, I discipline my children the way I was disciplined, but I always make sure they understand why they are punished afterwards to hopefully avoid making the same mistake over and over.