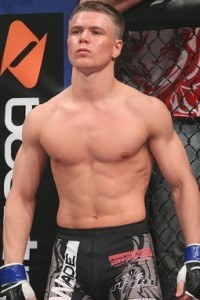 Get in, get out and get paid. That may have not been the game plan for UFC rookie Chris Wade but that’s how it went down in tonight’s first UFC 177 bout. Wade was the former Ring of Combat champion and was set to fight next month but was granted his release by Lou Neglia.

It was an easy first fight for our chief Jack Bratcher. Here is his recapped the following sentences. Wade with an early takedown, in side mount. Carrizosa trying to stand but Wade drags him back down, locks up a guillotine, rolls to mount and Carrizosa goes to sleep. Great UFC debut for Chris Wade.

The fight lasted a whopping 72 seconds. With the win Wade now makes it three wins in a row. It was the first loss for Carrizosa.

That’s how things started off and we are with you all night! Get the great play by play from Jack by clicking here.