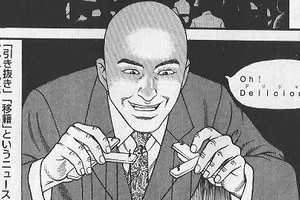 When UFC President Dana White got to work on Thursday, his PR team informed him he’d made GQ’s list of the “Top 25 Sleaziest People in Sports”. White came in at no. 8, right between War Machine and Lance Armstrong. Ouch.

Their reasoning is thus:

“Turns out underpaying your UFC employees, bullying rivals, and generally impersonating Don King as a bald white guy doesn’t do wonders for your charisma!”

GQ on Dana, #8 sleaziest in sports. One below War Machine. Damn. pic.twitter.com/ehV0QA0JlU

“You’re never going to be able to stop what people say about you, and everybody isn’t going to love you. But I don’t take offense to anything. When you’re in a public position like this you’re always going to have people say things about you. Believe me, if I worried about everything that was said about me, I would have been a mess a long time ago. That kind of stuff doesn’t bother me at all, not even a little bit.”

White being compared to Don King is nothing new. And while he may not particularly care if GQ thinks he’s a sleazebag, he does feel it’s “unfair” for them to say the UFC underpays its fighters:

“It was definitely written by someone who is uneducated about the sport. I’m sandwiched between War Machine and Lance Armstrong. The thing that’s unfortunate is that it’s unfair for the UFC as a brand. UFC pays its fighters very well.”

“Hopefully a fighter can break into the top 10, maybe gain sponsors – the list goes on and on. There are a lot of great things that go on here. The Fertitta brothers invested the money to build this thing and make the sport what it is today. They gave everybody the opportunity – from me to you to the fighters and lots of other people.”

Here’s the fine gentlemen who made the top 10. Tell us in the comments section below why you feel White deserves or does not deserve to be lumped in with this list of alleged racists, murderers, woman-beaters and cheats: