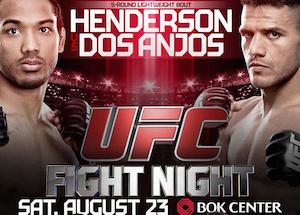 ProMMAnow.com will provide live results and round-by-round updates of all the action.

Round 1 – Big fight for Sanchez (6-0) against the veteran Reis (17-5) on short notice. Sanchez circling as Reis follows. Trading some kicks in the opening minutes. Overhand left from Sanchez. Left hand, and an uppercut from Reis. Nice right from Sanchez buckles Reis a bit. Reis scores a takedown and takes Sanchez’s back, stays on as Sanchez gets back to his feet with under a minute left in the round. PMN sees the round 10-9 for Reis.

Round 2 – Big left from Reis during an exchange, but Sanchez hurts Reis with a big left, then drops him with a head kick. Reis gets to his feet and takes a big body kick. Nice stiff left from Reis. Reis pushes him to the cage, and scoops a double leg takedown but Sanchez pops right up. Reis drags him back down and takes his back again with half the round left. Sanchez escapes. Big body kick from Reis, partially blocked. Right hook from Reis. Left hook from Sanchez. Reis is able to get a takedown and take his back again, both hooks in. PMN scores it 10-9 for Sanchez.

Round 3 – Greg Jackson asks Sanchez if he’s having fun, then tells him to go knock Reis out. Sanchez says, “I will”. Body kick from Reis, then scores another double leg, but Sanchez right back up. Trip takedown from Reis, takes his back again. Sanchez stands with Reis on his back. Sanchez eventually escapes with just over 2 minutes to go. Left hook from Sanchez. Left from Reis sets up a takedown. Reis looking for a neck crank with a minute to go. Sanchez escapes back to the feet. Sanchez looking for the knockout now. He tries to find the chin as Reis avoids. PMN scores the round 10-9 for Reis and the fight 29-28 for Reis. But a great showing for Joby Sanchez on short notice in his UFC debut. This kid is only 23-years-old.

Round 1 – Heatherly puts Saunders on his back early. Rubber guard from Saunders, Heatherly locked up tight, eats some elbows. Saunders locks up an omoplata, trapping Heatherly again, he’s in trouble as Saunders cranks it INCREDIBLY hard! Heatherly obviously in pain; it’s a nasty angle, and he taps out. Great return to the UFC showing from Ben Saunders. Impressive. Eddie Bravo is in his corner and looks very happy.

Round 1 – Phillips with a big leg kick but Hobar scores a takedown. Phillips attacking off his back with strikes and a couple triangle attempts. Hobar in side mount, dropping elbows. Phillips lands an up kick, another, and one more for good measure. Hobar working the ground and pound, stands up and eats another up kick. I actually think Phillips out scored him off his back. PMN scores the round 10-9 for Phillips.

Round 2 – Hobar gets a takedown early but Phillips is right back up. Hobar riding his back, lands some knees to the face, clinch, knee from Phillips to the body. Clinch-fighting. Phillips gets off with a knee and some punches. Hobar with a nice left.Then a right elbow to the side of the head, and he puts Phillips back down on the canvas. Hobar postures up to defend an armbar and eats another up kick. Hobar cuts him with an elbow. Works the ground and pound until the bell. PMN scores it 10-9 Hobar.

Round 3 – Takedown from Hobar. Phillips gets to his feet, eats a punch and gets slammed back down. Phillips gets back to his feet after a time but, Hobar stays on him in the clinch and dumps him back to the mat for the 7th time in this fight. He’s 50% on his takedown attempts. Hobar working the elbows and ground and pound. Phillips gives up his back, gets to his feet. Hobar pressing on him, lands a couple shots before the bell. PMN scores the round 10-9 Hobar, and the fight 29-28 for Hobar.

Round 2 – Body kick from Dariush. Left counter from Martin. Leg kick. Dariush with a takedown but Martin uses a kimura sweep to roll right back to his feet. Clinch fighting, Grueling fight. Ref separates them. Both guys are cut. Dariush with the takedown, and takes half guard from top. Passes to side mount as he locks up a head and arm choke and Martin taps out.

Round 1 – Magny with a big height/reach advantage. Trip takedown from Magny, looking for the choke, but Garcia escapes. Magny stays on him and drags him back down and works some ground and pound from half guard. Magny stands up. Ref lets Garcia up at the bell. PMN scores it 10-9 for Magny.

Round 2 – Garcia’s right knee is apparently injured, after twisting it in round one. He connects with a right. Big takedown from Garcia, working from inside full guard. Magny able to get back up without incurring any damage. He’s looking for his own takedown. Magny backs up from the clinch, lands a right. Magny’s boxing and footwork showing he’s the more skilled boxer. Clinch from Garcia. They square back up before the bell but nothing lands. PMN scores the round 10-9 Magny (could go either way though).

Round 3 – Magny’s corner informs Magny of Garcia’s knee injury. Garcia picks up Magny for a big slam. Magny makes his way back up but Garcia is on his back with one hook in. Garcia still hanging on Magny, no longer on his back. Clinch battle now, but Garcia drops levels for another takedown. Garcia clinging to Magny as he gets back up but the crowd doesn’t like it. Magny picks Garcia up for a slam of his own, almost spiking the head. He’s back up. Magny with a one two, and a takedown before the bell. I’m scoring the round for Magny because he also scored two takedowns and I think did more damage on the feet. PMN scores it 10-9 for Magny and the fight 30-27 for Magny.

Round 1 – Right hook from Niinimaki. Skelly looking for the takedown, takes Niinimaki’s back while standing. Drags him to the canvas. Niinimaki is able to lock on a guillotine but Skelly escapes into full mount. Niinimaki gives up his back and Skelly locks on the RNC, and Niinimaki taps out. That’s all she wrote kiddos, much to the pleasure of Skelly’s coach Marc Laimon.

Round 1 – Leg kick from Vick. Lazaro with one on the inside. Vick looks huge for lightweight by the way. They trade more leg kicks. Vick landing some nice punches now but Lazaro immediately scores a takedown. Vick sweeps but Lazaro gets back to his feet, lands a right. Head kick from Vick. Striking a bit sloppy here but they are throwing down. Nice right from Lazaro. Close round.

Round 2 – Punch combo and a body kick from Lazaro. Lazaro getting the better of the standup right now, landing some big leg kicks and nice punches. Vick cut by his left eye. Huge right hand from Vick and Lazaro is wobbly. He goes for a takedown, stuffed. Vick lands another right but Lazaro firing back. More punch exchanges before Lazaro gets the takedown. PMN scores the round 10-9 for Lazaro.

Round 3 – After a couple minutes of striking, with nothing too significant landing, Vick scores a knockdown with a head kick. He gets right up though until Vick lands a low blow and time is called. Vick ends up on his back after a failed flying knee attempt, and then the bell. PMN scores the round 10-9 for Vick. Fight could go either way depending on how they scored round one.

Round 2 – Nice knee and a big right from Holloway. Collard catches a kick and dumps Holloway, but he’s right back up. Big right stuns Collard. He goes for a takedown after firing back. Holloway escapes. Collard looking a bit winded after taking this fight on very short notice. Collard looks for a takedown but Holloway jumps on his back. Collard escapes and it’s back to the feet. Collard was an amateur boxing champ and is pretty fun to watch here. Collard survives a triangle attempt before the bell. PMN scores the round 10-9 for Holloway.

Round 3 – Regardless of the outcome of this fight, I want to see more of Clay Collard — especially with a full training camp. This guy knows how to put on a show and is definitely a “real fighter”. Collard chasing Holloway down, trying to finish. Leg kicks from Collard, looking for a single. Holloway plants a few elbows to the ear and escapes. Knee to the shoulder of a grounded Collard and Holloway takes top position in half guard. Collard gives up his back. Holloway flattens him out, lands an elbow. More punches an elbows from full mount now. Collard gives up the back again and Holloway pounds on him until the ref stops it. Despite that, I want to see more Clay Collard.

Round 2 – Big overhand right hurts Carmont. He follows up with a right hook and an uppercut drops Carmont. And this fight is over! Boom! Great fourth win in a row from Leites against a very technical and tough striker (who had GSP in his corner).

Round 1 – Pyle shoots, stuffed. Again. Leg kick Mein. Two big left hooks and Mike Pyle goes down, he follows up with more big shots and Mike Pyle is out. Holy smokes that was powerful! And with all the trouble surrounding his Dad to boot. Surprised he could keep his mind focused on the fight. That’s two pretty brutal knockouts Pyle has suffered in his last three fights. Is his chin starting to falter? Remember the 29-second KO Pyle suffered from the fists of Matt Brown a year ago this month?

Round 1 – Wonder if Bendo has a toothpick in his mouth? Body kick from dos Anjos, then a leg kick. Leg kick from Bendo. Nice left from dos Anjos. Nice right hook to the body from Bendo. Body shot, leg kick in return from dos Anjos. body kick from Bendo. Push kick knocks RDA to the ground. Big body kick from RDA after he gets back up. Someone is going to sleep in this fight if they keep this up. Big left from RDA rocks Bendo, Lands another left, and a flying knee as Bendo shoots in. As Bendo gets up RDA then lands a huge left hook and Bendo goes down and out. Crazy! No one has ever done that to Benson Henderson. Look out for Rafael dos Anjos, he just served notice to the lightweight division. He improves to 22-7. He’s been in the UFC since 2008 and has never looked better.