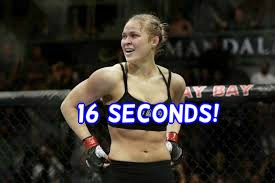 It started off with a quick exchange before Rousey connected with a right hand and then landed her signature hip toss. Once she had Alexis Davis on her back she dropped a barrage of shots forcing the referee to step in and call the fight. No one told Alexis Davis as she was still trying to hold on to Rousey after the fight was over.

What can you even say about this? It only took 16 seconds to win the fight. How on in the world can Ronda Rousey get better and better each fight? She does and she is finishing fights with the quickness.

Did we all buy in that Alexis Davis was the best to ever fight Ronda? Alexis Davis is a great fighter but to date, there isn’t a woman on the planet as good as Ms. Rousey.

One last question, who’s next?

Just one fight to go for UFC 175! Stay close for more right here at ProMMANow.