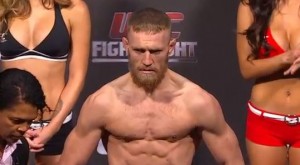 UFC officials have announced that Cole Miller is injured and has had to pull out of his UFC Dublin main event bout against Conor McGregor on July 19. The anticipated grudge match will be put on hold, and TUF winner Diego Brandao has agreed to step up and fight McGregor in the main event.

The UFC Dublin event is set to take place in the O2 Arena with tickets for the event going on sale Friday.

Brandao (18-9) is coming off a KO loss against Dustin Poirier in his last outing at UFC 168 in December. Brandao had won three consecutive fights prior to the loss, and holds an official UFC record of (4-2).

McGregor (14-2) is coming off a long layoff due to a knee injury, but won his last fight against Max Hollaway via unanimous decision. The Hollaway fight was just his second UFC fight, with his first UFC win coming in spectacular KO fashion against Marcus Brimage.