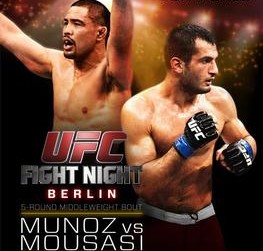 Round 2 – Crowd cheers. Big body kick from Carmont. Front kick. Left jab and big leg kick from Carmont. CB trying to get inside. Carmont lands a head kick. CB walks through it. Right to the body from CB. CB looking for the big left hook again. Carmont lands a front kick. Two leg kicks from CB. Big big leg kick and punch combo from Carmont. CB locks up a body lock takedown. Carmont gets to his knees and feet. Carmont with a kimura grip, standing now. Carmont gets put on his back but still has the kimura. CB remains on top and is free of the kimura. One minute to go. CB on top in half guard. Carmont gives up his back after briefly looking for the kimura. Carmont gets to his feet but CB still on his back as the round ends. PMN sees it 10-9 for Dollaway.

Round 3 – Touch gloves. Huge leg kick from Carmont. CB’s leg is bruised badly. Left hook from CB. Side kick from Carmont. Left hook to the body from CB. He blocks a head kick. Carmont shoots in, stuffed easily. One two from Carmont. Shoots in again, stuffed. CB hits a single leg takedown of his own and takes Carmont’s back with one hook in. CB bleeding from his forehead, not sure what that was from, probably that one two punch earlier. Carmont tries getting to his feet but CB staying heavy. Carmont hits the switch and is back on his feet, pressing CB to the cage. Elbow from Carmont. Again. CB ducks down for a single and gets Carmont on his back, now in full mount. CB postures up with punches and forces Carmont to give up his back. CB gets one hook in. Carmont tries getting to his knees but CB pins him back to the mat as time runs down. PMN sees the round 10-9 and the fight 30-27 for Dollaway.

CB said before the fight he really wanted to make a statement here. This win should put him in the top 10. He used his style to defeat a dangerous striker and even dropped him with a hook. It wasn’t the most exciting bout, but it was fun to see the clash of styles and see CB do what he needed to do to get the W. At the end of the day, that is the most important thing for your UFC longevity. CB also understands the need to be exciting and it shows in the cage. Great job by a 6-year UFC veteran.

Round 1 – Touch gloves. Munoz tries to shoot right away, no dice. Leg kick from Munoz. Munoz gets a double leg, lifts Mousasi up for a slam, but Mousasi is right back up. Jab from Mousasi. Stalking. Jab again. Inside leg kick from Mousasi. Munoz fires off a combo, gets tagged with a right counter. Munoz shoots, clinch against the cage as Mousasi turns him around. Dirty boxing, Mousasi scoring. Mousasi stalking again. Leg kick. Munoz shoots, stuffed. Mousasi uses a front choke to get Munoz on his back. Mousasi in side mount. Now in full mount for a split second. Munoz turtles up and eats some big shots. Munoz looking for a single, gets to his feet with a body lock against the cage. Munoz tries dragging him down but ends up on bottom, now gives up his back as Mousasi locks up the choke and Munoz taps out.

Munoz was ranked number 7 and Mousasi was 11 before this fight. This win should put Mousasi in the top 10. He also mentions he’d like the winner of Tim Kennedy and Luke Rockhold next — although I’m not sure that fight has even been announced. Munoz has now lost 3 of his last 4. Not looking so good right now against the top tier guys.

Be sure to join us starting at 6:30 p.m. ET for the TUF Brazil 3 Finale taking place this evening in Sao Paulo and headlined with a heavyweight match-up between Stipe Miocic and Fabio Maldonado.