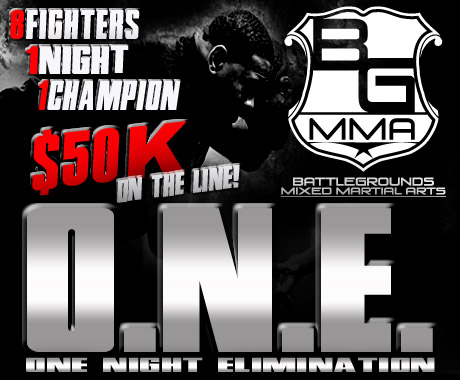 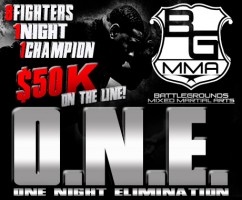 BattleGrounds MMA (www.battlegroundsone.com) announced today that it has confirmed two Superfights – a lightweight (155 pounds) showdown between Ryan Couture (7-3) of Las Vegas, Nev. and Jonny “The King of Late Night” Carson (11-6) of San Francisco, Calif., and a women’s atomweight (105 pounds) scrap between Nicdali “The Night Queen” Rivera-Calanoc (8-7) of Tulsa, Okla. andJen “Tink” Aniano (0-2) of Kalamazoo, Mich. – for its highly-anticipated O.N.E. event that will be headlined by a one-night, eight-man tournament at BOK Center in Tulsa on Friday, June 27.

The tournament affair, featuring an assembly of established and fast-rising stars in the welterweight (170 pounds) division, marks the first one-night, eight-man, single-elimination MMA affair in Tulsa since UFC 4 on Dec. 16, 1994, and will award its winner a hefty grand prize of $50,000.

“We are excited to showcase such high-caliber talent on what is, without a doubt, our most superb fight card to date,” said BattleGrounds MMA President and Olympic wrestling gold medalist Kenny Monday.  “Fans are going to see a mix of fast-paced, high-pressure tournament fights as well as several nationally recognized and local, emerging stars facing off in single, Superfights with potential tournament opportunities at stake in each bout.”

Couture, the 31-year-old son and protégé of retired legend Randy “The Natural” Couture, is coming off his second consecutive victory, a second round (1:34) submission (rear-naked choke) of Shakir McKillip at BattleGrounds MMA 4 on May 17.  In his previous start, Couture made quick work of Kyle Sjafiroeddin, using the rear-naked choke to submit Sjafiroeddin in the first round (2:14) of action at BattleGrounds MMA 3 on Jan. 18.

Prior to signing with BattleGrounds MMA, Couture compiled a career record of 6-1 while competing for Strikeforce.  His greatest win to date – a split decision over UFC star K.J. Noons – came during Strikeforce’s final event in Oklahoma City, Okla. on Jan. 12, 2013.

The matchup with Couture represents the 28-year-old Carson’s first start of 2014.  He will look to notch his second consecutive win after earning a unanimous decision over Marcio Navarro in Catoosa, Okla. on April 12, 2013.

Carson is a member of the Skrap Pack, the vaunted, San Francisco, Calif.-based fight squad founded and headed by UFC superstar Gilbert “El Nino” Melendez.  Carson relocated from his native Broken Arrow, Okla. to The Golden Gate City six years ago after receiving an invitation from Melendez to become a full-time member of the team.

Rivera-Calanoc, the 28-year-old wife of retired kickboxing and MMA star Travis Calanoc, will look to return to the win column after suffering a first round (4:57) submission (rear-naked choke) defeat in her Invicta Fighting Championships world title bid against reigning champion Jessica Penne on July 13, 2013.

One fight prior to the championship matchup, the feisty Rivera-Calanoc, who has been touted as the “female Wanderlei Silva” for her hard-charging, aggressive-minded fighting style, earned a unanimous decision victory over Angelica Chavez on July 28, 2012.  An eight-year veteran of professional MMA, Rivera-Calanoc began boxing at age 11 as a means of emulating her childhood hero, Oscar De La Hoya.

Also 28 years of age, Aniano brings over a decade of experience in martial arts to the BattleGrounds MMA cage.  A former high school and collegiate wrestler who competed in freestyle rules wrestling tournaments while attending community college, Aniano added Brazilian Jiu-Jitsu to her repertoire and continued studying the submission fighting art while pursuing a master’s degree in education at the University of Michigan.

After graduating in 2010, Aniano moved to Kalamazoo to train under Gracie Jiu-Jitsu black belt Clint Crabtree and MMA coach Master Amir Khillah.  Aniano also holds a position as an alternative education middle school teacher where she mentors at youth risk.

Additional bouts will be announced soon.

Tickets for the BattleGrounds MMA event, priced from $65, can be purchased online at www.bokcenter.com as well as at Arby’s Box Office at the BOK Center, all ticket outlets, or by calling 1-800-7-BOKCTR.