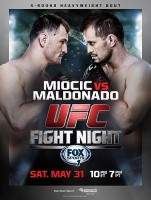 If you didn’t already know, there are two UFC events taking place on Saturday, May 31. The first being the UFC Fight Night 41 event in Berlin, Germany, and the second being the TUF Brazil 3 event in Sao Paulo, Brazil.

The preliminary fights will begin 6:30 p.m. ET on the UFC Fight Pass subscription service. They will transition to FOX Sports 1 at 8 p.m. ET, and the main card will begin at 10 p.m. ET.