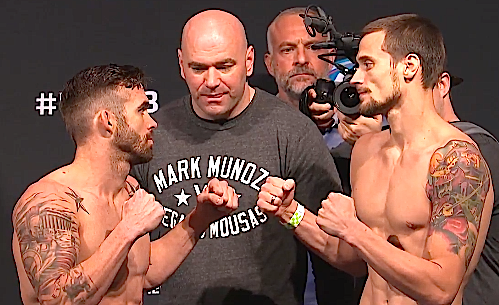 I feel like we have missed out on an epic fight that the injury bug stole away. James Krause and Jamie Varner was poised to be a back and forth war in the lightweight division but instead we got a round filled with grit and skill from both men.

Krause started things off using his length to batter the lower legs of the former WEC champion. Early on Krause landed a kick and Varner landed very awkwardly, rolling his ankle. Varner was circling out and fell and immediately we knew that something was wrong. Varner powered through and was able to get a takedown. He fought off his back from a very crafty Krause who looked so slick on the ground.

The men were eventually back standing and Varner was favoring his left foot heavily. He was still throwing bombs and was able to put some damage on Krause but James was able to use the injury to his advantage and land a kick to the calf/ankle area.

The first round was all Krause but as soon as the horn sounded it was clear that the fight was over. Jamie Varner’s ankle was shredded. He hopped around, congratulated Krause and used little assistance to get back to the locker room.

Krause improves to  2-1 inside the UFC. Varner drops his third straight but all of those fights were top notch entertainment. For all of your UFC 173 event results click here.