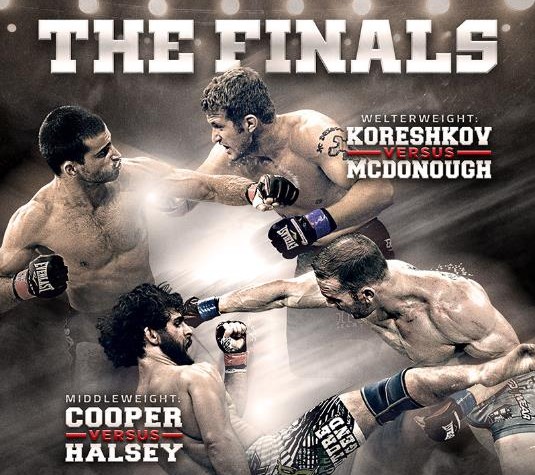 Bellator 122 will be broadcast live from Pechanga Resort & Casino beginning at 6 p.m. PST on Spike TV.  The preliminary card will be streamed live and free exclusively on Spike.com starting at 4 p.m. Tickets for the event are on sale now and can be purchased by visiting Pechanga.com, Bellator.com, or by calling the Pechanga Box Office at 877-711-2946 or visiting between noon and 8 p.m. daily.

After the being postponed due to Cooper experiencing a back injury, the Bellator Middleweight Tournament will be settled when Cooper and Halsey battle on July 25th.  A former tournament finalist, Cooper’s second-round KO over Kendall Grove in the semifinals punched his ticket to the finals and he plans on ending his fight with Halsey the exact same way.

“My injury was a setback, but with some time off I feel great heading into this fight,” Cooper said. I am stronger and couldn’t be more excited to get back into the cage. I’m looking forward to winning another tournament and getting another shot against Shlemenko.”

At 6-0, Halsey has won three of his six professional victories by KO or submission and will put his skills to the test against Cooper. After going the distance with Joe Pacheco in the semifinals, Halsey feels like his stamina and ability to grind will be his biggest asset in the tournament final.

In a battle of strikers, Koreshkov cruised through the opening round and semifinals with two first round knockouts against Nah-Shon Burrell and Justin Baesman.  With 13 victories coming by KO, Koreshkov is looking for the quick finish against McDonough.

With an undefeated professional record, McDonough is looking to improve his spotless 11-0 record in front of a sold out Southern California crowd.  With a strong performance against Jesse Juarez and a lights out KO against Nathan Coy in his first two fights of the tournament, McDonough is ready to make his mark in the Bellator cage against Koreshkov in the tournament finals.

“Andre Koreshkov is one of the best Welterweights in the world and I’ve got a lot of respect for him, he is an exciting fighter and dynamic finisher,” McDonough said. “However he is standing in the way of me getting one step closer to the belt. I can assure you Bellator MMA fans are not going to want to miss this fight!”