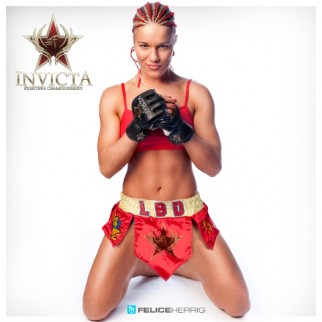 Invicta FC and XFC women MMA veteran Felice Herrig (9-5) will make her UFC debut in September as a member of the inaugural all women’s “Ultimate Fighter” TV show that will air on FOX Sports 1. The winner of of TUF 20 tournament will be crowned the inaugural UFC women’s strawweight champion.

Herrig has never been one to be shy about showing off her assets, so she recently competed in a bikini competition and posted a ton of pics via her Instagram account. However, the video and photo below is what really caught our attention(peep the guy trying to sneak a video with his phone at the end!!):

Herrig lost her last outing against undefeated Tecia Torres at Invicta FC 7 in December 2013. Look for her on TUF 20 which begins airing on September 10th. Oh, and for good measure: