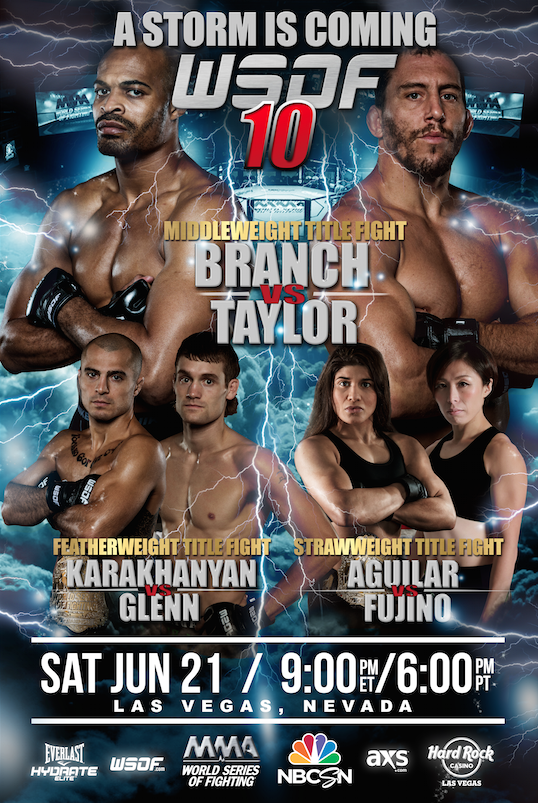 Additionally, the main card will include intense matchups of lightweights Tyson Griffin (16-7) vs. Luiz “Buscape” Firmino (17-6) and featherweights Nick Lobosco (7-0) vs. Lance Palmer (7-1).

“We wanted this event to be a special night, and it doesn’t get much better than having three world titles on the line at one event,” Sefo said. “This main card just might be our best yet. Three championship fights and two additional bouts that seem destined to deliver fireworks. This is going to be one night you don’t want to miss.”

Tickets for “World Series of Fighting 10: Branch vs. Taylor” start at just $39 and are currently on sale at AXS.com.

World Series of Fighting champion Jessica Aguilar, the first and only Mexican-American woman to hold a title in a major MMA promotion, is the world’s best 115-pound female fighter. The American Top Team product made her World Series of Fighting debut in January, scoring a submission win over Alida Gray to claim the promotion’s strawweight world title. Aguilar defends her belt for the first time against 33-year-old Fujino, a dangerous and well-rounded athlete who has fought a Who’s Who of her home nation’s best fighters since turning pro in 2004.

Meanwhile, the 30-year-old Tyson Griffin made his World Series of Fighting debut in August. He’ll look to put on his best performance yet against the gritty Luiz Firmino, a Brazilian jiu-jitsu black belt who previously fought for PRIDE and DREAM during an impressive 14-year career. Firmino took part in his first professional bout shortly after his 18th birthday and remains an elite athlete at 32, as witnessed by his World Series of Fighting 6 win over Jacob Volkmann.

Nicky Lobosco is a heavy-handed featherweight fighting with St. Charles MMA in Missouri. The high school wrestling coach made a splash at WSOF 6 when he scored a vicious knockout of Fabio Mello with a head kick and punches. Lance Palmer is a highly decorated wrestler who is considered one of the sports top prospects to watch. The Team Alpha Male product contended for the WSOF featherweight championship this past December at WSOF 7, but came up short against current champion Georgi Karakhanyan. Palmer looks to reestablish himself as one of the sports best featherweights with a win over Lobosco.

In the previously announced main event, David Branch is a three-time World Series of Fighting veteran who earned his way into the championship fight with a September win over Danillo Villefort in the company’s middleweight tournament semifinal. The 32-year-old Branch, a Brazilian jiu-jitsu black belt under Renzo Gracie, also boasts wins over Paulo Filho and Dustin Jacoby under the World Series of Fighting banner. The highly-regarded New Yorker collides with Jesse Taylor, a highly-decorated wrestling machine who smashed Elvis Mutapcic in his semifinal bout five months ago and owns a seven-fight winning streak.

Additionally, Russian-born Georgi Karakhanyan, coming off an impressive third-round submission over big-name talent Lance Palmer that won him the World Series of Fighting featherweight belt, is widely considered one of the top 145-pounders on the planet. The 28-year-old destroyer Karakhanyan goes for 10 straight wins against the very aggressive Rick Glenn, an Iowa native who is trained by standup wizard Duke Roufus at the Roufusport MMA Academy. Karakhanyan vs. Glenn looks to be a war.

About “World Series of Fighting” (WSOF)