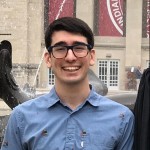 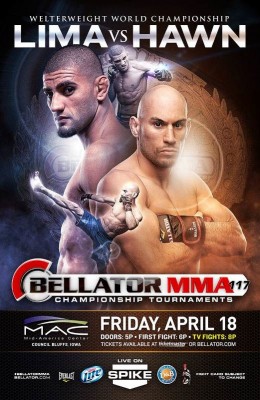 This Friday, Rick Hawn will be challenging Douglas Lima for the Bellator Welterweight world championship! Bellator 117 also features a pair of Lightweight tournament semifinals, and a Welterweight feature fight.

Karl Amoussou vs David Gomez
Gomez won his last fight against Quinton McCottrell via tko, while Amoussou lost his last fight to Paul Bradley. Amoussou has been on a bit of a skid lately, but I think he gets back to his winning ways with this fight. Gomez hasn’t fought the same level of competition as Amoussou has throughout his career. Expect Amoussou to secure an early tap.

Derek Anderson vs Marcin Held
Derek Anderson won his last fight via knockout, while Marcin Held won his last fight via toehold. Both fighters have looked impressive in their careers so far. Anderson can’t allow Held to get him to the ground. Anderson must look to keep it on the feet and outstrike his opponent. Held needs to get this fight to the ground and lock in one of his signature leg locks. Held should eventually be able to drag this fight to the ground where he will punch his ticket to the Lightweight tournament finals!

Patricky Pitbull vs Derek Campos
Patricky Pitbull was last seen knocking out David Rickels, while Derek Campos picked up a decision win over Tim Welch. Pitbull seems to have gotten over the brief losing streak he was going through. Campos is a very tough fighter, but Pitbull is a bad match up for him. Expect Pitbull’s punching power to be on display as he knocks out an overmatched Campos and punches his ticket to the finals!

Douglas Lima vs Rick Hawn
Douglas Lima brutally knocked out veteran Ben Saunders in his last fight, while Rick Hawn picked up a KO victory over Ron Keslar. This fight is a very interesting stylistic match up. Hawn sometimes falls in love with his hands too much and doesn’t use his world class Judo. Lima has extraordinary power in both his hands and legs. Hawn can’t let Lima find his range with his strikes or this will be a quick night for him. Lima needs to avoid the clinch and keep it at striking distance. Hawn loves his hands a bit too much for my taste, so I’ll take Lima on this one.