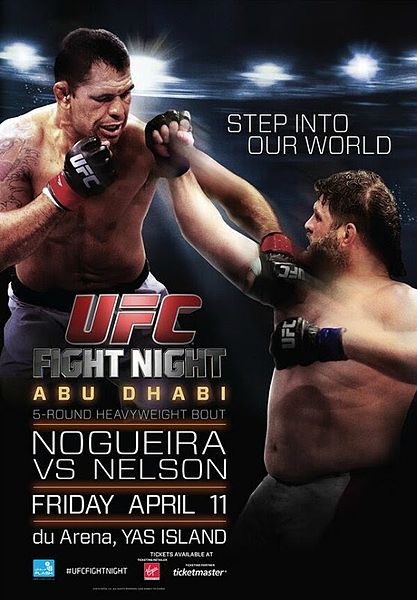 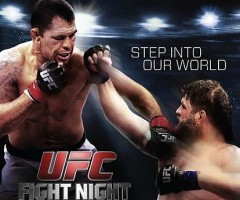 “UFC Fight Night 39: Nogueira vs. Nelson” is going down today in Abu Dhabi. Heavyweights Antonio Rodrigo Nogueira and Roy Nelson will clash in the headliner. ProMMAnow.com will provide you with LIVE results and play-by-play commentary starting with the main card at 2 p.m. ET. The entire event will air exclusively on UFC Fight Pass here in the U.S.

Round 1 – Left from Nijem counters a leg kick from Dariush. Big left from Dariush connects. Body kick from Dariush, Nijem catches it and dumps him on his back. Throws a few punches while hovering over him, kicks his thighs before letting Dariush up. Dariush shoots, stuffed. He pushes Nijem to the cage, nice elbow, he backs out. They square up again. Nijem blocks a high kick. Inside leg kick from Nijem. Nice left right from Nijem. Good movement from Nijem. Jumping knee from Dariush but he gets caught by a punch from Nijem and goes down to a knee. Right back up but Nijem stays on him with big punches hurting him and trying to finish. Nijem locks on a guillotine but Dariush survives, although he’s now on his back eating ground and pound. Nijem takes full mount and continues to land punches to the bloody face of Dariush. Finally the ref stops the beating and Nijem scores and impressive TKO win.

Round 1 – Touch gloves. Big body kick from LaFlare, again. Howard counters with a punch. Single leg takedown from LaFlare. Now on top in half guard. LaFlare looks much bigger than “Doomsday”. Definitely a reach and height advantage here. LaFlare passes to side mount. Howard scrambles but ends back up with LaFlare in side mount, he does achieve half guard, but LaFlare looking for a D’arce choke. He lets the choke go. Howard gets to his feet, takes a knee to the head on the way. Left from Howard. LaFlare lands a couple knees and an elbow against the cage. Body lock from LaFlare, pushes Howard to the cage. He muscles Howard to his knees but Howard presses him to the cage, looking for his own single. Elbow from LaFlare on the break. Howard walks forward, lands a body and a head shot. Big right to the body from LaFlare. Knee to the head, left kick to the body. Howard breathing with his mouth open. Big left from LaFlare. Big leg kick from Howard, again. Nice body kick from LaFlare, Howard presses him to the cage. Bell. PMN sees the round 10-9 for LaFlare.

Round 2 – Leg kick LaFlare but he pays for it with a big left hook from Howard that wobbles him. He follows it with a right uppercut, then a body lock takedown. Howard on top in half guard. LaFlare is able to sweep and ends up on top in side mount. He lands an elbow but Howard reverses and they are back to the feet. Nice body kick from LaFlare. They tie up against the cage and Howard takes an illegal knee to the family jewels. Howard requests to see the doctor. He looks to be in a LOT of pain. Okay, Howard decides to continue. Body lock takedown from LaFlare. Side mount from LaFlare. Howard gives up his back, gets to his feet. He presses LaFlare to the cage but takes two knees to the gut, body shot from LaFlare. Leg kick from Howard. Right hook from LaFlare. LaFlare gets a takedown but Howard rolls him right over and they are back up against the cage. Dirty boxing from LaFlare. Knee to the boy. Howard presses him to the cage, then LaFlare turns him back around and lands a knee. Howard lands a big uppercut, a left hook, they move to the center. Fairly close round but I’m leaning toward Howard 10-9. Plus he came back from that terrible knee to the groin.

Round 3 – Front kick from LaFlare but Howard lands a big inside leg kick that buckles LaFlare. He shoots in and puts Howard on his back. Howard sweeps and they are up. Lands a big left hook. Howard rolls with a couple nice punches. Leg kick LaFlare. LaFlare with the takedown, immediate reversal from Howard but LaFlare reverses again and is now on top inside half guard. Butterfly guard from Howard. Now open guard. LaFlare to half guard, then side mount. Howard scrambles, gives up his back, tries to roll. 90 seconds left. Howard rolls for a leg, locks it up but LaFlare pushes his way out with his other foot. Howard goes for another leg, now looking for an arm. They’re in gridlock as time runs out. PMN sees it 10-9 for LaFlare and the fight 29-28 for LaFlare. Unfortunately that groin strike changed the momentum of the bout.

Round 1 – Clay bouncing per usual. Kawajiri remaining calm. Overhand right from Guida. Leg kick Kawajiri. Big overhand right from Guida drops Kawajiri and Guida jumps on his back against the cage. Guida now pressing Kawajiri to the cage, drops down for a single, lets it go and goes for a body lock. Kawajiri looking for a standing kimura, he rolls with the kimura. Guida then picks him up for a slam but Kawajiri still has the arm. He breaks free and lands a punch. Guida with a bodylock from the back against the cage. Kawajiri again looking for that standing kimura. Guida picks him up and slams him on his face. Kawajiri again goes back looking for the kimura as they are back on their feet straight away. They break apart as Guida lands a couple punches, but Kawajiri lifts him up for a big takedown, now on top in half guard. Guida looking for a kimura from the bottom. Kawajiri on top, but gets swept. PMN sees it 10-9 for Guida as he takes a lap around the cage.

Round 2 – High kick attempt from Kawajiri, Guida shoots in for a single against the cage. Guida scoops the leg to put Kawajiri on his butt briefly. Kawajiri, standing, now looking for that kimura, then lands a few elbows, before rolling with kimura back to their feet. Jab from Kawajiri. Guida shoots again against the cage, takes some elbows to the side of the head and he’s cut open. He picks Kawajiri up for the slam, but he’s right up and looking for that kimura again. They roll, but Guida ends up on top trying to hold Kawajiri down. Knees to the thighs from Guida as they are back up. Guida still searching for a takedown here, Kawajiri picks him up and dumps him on his head. Guida in side control now, Kawajiri gives up his back, then gets to his feet as Guida holds on from the back. PMN sees the round 10-9 Guida.

Round 3 – Head kick from Guida. Kawajiri with the counter punch. Left hook from Guida. Kawajiri swings at air. Kawajiri shoots, stuffed. He  presses Guida to the cage looking for a single. Guida teeing off with little punches to the head and the occasional elbow. Kawajiri has control of one leg and stopping the momentum of Guida, which is quite hard to do to the Energizer Bunny. Guida is able to escape to his feet. Left hook, leg kick from Guida. Kawajiri looking tired, but lands a nice body kick/knee strike. Guida is able to get a bodylock from the back once again as Kawajiri looks for the kimura. Guida lifts him up for a big takedown but Kawajiri has him in a tight guillotine, but Guida pops his head right out. Kawajiri on his knees, goes for Guida’s foot, but Guida seems to just be the more skilled fighter and grappler and it showed in every area of this fight. Guida takes a winner’s lap. PMN sees it 10-9 and the fight 30-27 for Guida. Guida calls out Conor McGregor after the fight.

Round 1 – Two guys who can take a ton of punishment. Both guys looking for the jab. Right from Nog. Nelson with jab, and a big uppercut and overhand right that puts Nog down. He’s back up but wobbly. Nelson smells blood, trying to get inside. Nog avoids some body shot and head shot attempts. Jab from Nog. Again. Nelson circles away from the cage. Nice right from Nelson. Huge overhand right from Nelson puts Nog down, he somehow gets up by sheer heart but is VERY wobbly. Nelson looking for the kill, but patiently. He lands a couple shots then a HUGE overhand right that STARCHES Minotauro Nogueira. STARCHED. Wow!! Nelson goes to check on his fallen opponent.

Abu Dhabi got a great main event compared to the absolute debacle they got last go-round (Silva vs. Maia). Good stuff.
[ads1]
[ads2]