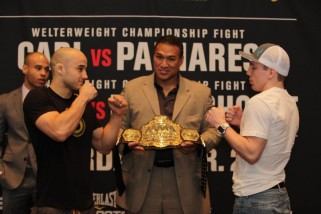 The following are quote highlights from the press conference:

“I don’t think it’s hard to digest at all (Palhares fighting for a title). His record and the people he has fought speaks for itself. He’s fought some of the best in the world. He didn’t get cut from UFC because he lost. He got cut because of a submission he held too long, so they say. That being said, Rousimar Palhares is one of the best fighters in the world.”

“Steve Carl is the champion and I think the odds makers have it wrong. I believe he’s the favorite in this fight. Rousimar Palhares has to come into his house and he has to prove he can be the champ. Steve Carl is not the fighter he was three or four years ago. I’m excited as a fan to have the best seat in the house and I’m excited for this fight.

“I think Burkmam-Stinson will be the fight of the night, that’s my prediction.”

“This is my fifth fight at the Hard Rock. It’s really nice to see how much this show has grown, even in the short few months since I fought last. Tyler (Stinson) poses some of the best hands I’ve ever faced in my 40 fights so I’m really looking forward to this challenge on Saturday night. This fight against Stinson will hopefully just prove I had an off night and I’ll be back fighting for Steve Carl’s belt.”

“I’m here to kick somebody’s ass. The name I signed on the contract today was Burkman. I’m a kid from a small town in Kansas. I’m not even supposed to be here. That’s basically it. I’m just ready to fight. That’s great that Ali thinks this is going to be the Fight of the Night. That’s good, but that means he has to do something good. I’m going to try and dominate this fight. Fight of the Night? I’d rather have Knockout of the Night.”

“Of course my motivation comes from fighting for a belt. Who wouldn’t want to fight for a belt?”