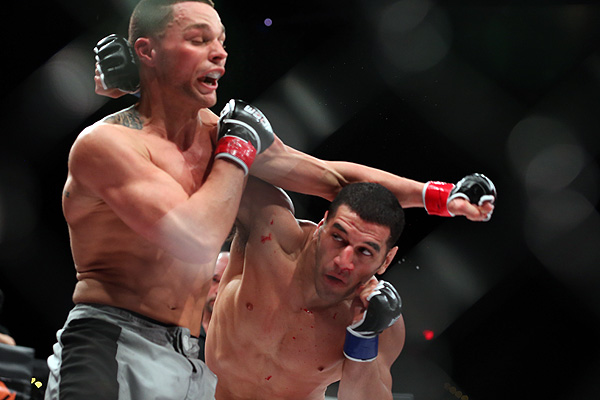 With such a stacked main card unfolding on Saturday at WSOF 9: Carl vs Palhares, some of us might be forgetting all the great talent scheduled to throw down in the preliminary bouts streaming live on WSOF.com. Two warriors that the MMA world is buzzing about are the brutal brothers from Hawaii, Brenson and Bryson Hansen. Brenson Hansen became an overnight WSOF sensation with his flying knee KO in his promotional debut, followed by a hard-fought decision loss that many felt should have gone Brenson’s way. On Saturday in Las Vegas, Brenson looks to get back in the win column with another dominant performance.

ProMMANow recently spoke with the up-and-coming knockout artist to get the scoop on this promising young talent.

Answers from Brenson are italicized.

How is preparation going for your bout with Boostayre Nefarios this Saturday?

“Preparation has gone well, everything is going well. I’m happy to be healthy and avoid any injuries throughout this camp.”

What can you tell me about your opponent other than the fact that he has an odd name?

So it sounds like this is the type of stylistic match-up where you are expecting to put on a great show?

“Exactly. I’m looking for someone to just meet me in the middle, so it sounds really good to me.”

You suffered your first loss in your previous outing with a controversial split decision against Freddy Assuncao. Give me your thoughts on that fight.

“Personally I don’t feel like I lost. Everybody that knows anything about MMA, everyone I am surrounded with and veterans of the sport, all told me that I won that fight. It’s good to have those kind of guys telling me that I won the fight because they actually know what they’re watching, so I don’t really feel like I’m coming off of a loss. I actually learned a lot in that fight, I didn’t really play to the judges as much as I should have and I paid for it. I don’t plan on that ever happening again.”

It sounds like you were very confident in your performance and the judges call hasn’t bogged you down mentally whatsoever, is that accurate?

“Yeah, I didn’t let it get to mentally at all. I’m just getting more comfortable in there and things are going great, so I was happy with my performance and an overall good experience too.”

In your promotional debut you landed a beautiful flying knee for the KO, securing a spot on the WSOF highlight reel for years to come. Could you honestly have been any happier with a debut like that?

“Couldn’t be happier. Everything went right, my training camp was good and I was able to show up and perform that night, so I’m thankful for that. The knockout was just icing on the cake, all I want to do is go out there and get wins.”

You’re a proud Hawaiian native, something you have in common with many great fighters like BJ Penn, Travis Browne and Brad Tavares just to name a few. Tell me about your background as a marital artist and where you started out?

“I feel like I’m that new breed of fighter. I started training when I was fourteen years old with my team back home. I quit my other sports for this sport, I knew I wasn’t going to be a NFL linebacker because I’m not that big and not that fast, but I was pretty good at fighting. So I decided to follow this dream and it’s gotten me to where I am today.”

Like your fellow Hawaiian Brad Tavares, you train at Xtreme Couture with renowned striking coach Ray Sefo, who is now also your boss. Tell me about working with him and what it’s liking fighting under your coaches banner?

“Just to have that kind of guy around me is huge, he knows the answer to every question I have. Some guys will say ‘do this’ and you’ll be like ‘well, what if it doesn’t work?’ And they’ll say ‘ then you’re doing it wrong.’ Ray will take a different angle and say ‘adapt this and then it will work.’ We’re all on the same page and it’s just good to have people like that around you, I’m always so thankful.”

Will Ray be in your corner on fight night or is he unable to do so being the company front man?

“No he has different obligations that night with the promotion, but Brad is my roommate and we usually corner each other. We pretty much think the same so he’s able to coach me well.”

I ask all the WSOF athletes this next question and I’m likely going to hear the same thing I always hear. What has your experience been with WSOF so far and what do you think makes this promotion so different from all the other brands?

“World Series of Fighting has been amazing. It’s just a baby company and for what they have been able to accomplish already, the hospitality they have been able to give all the fighters, I think it’s awesome. They take care all of us, everything is professional, you show up and do your job and that’s all they ask of you. It’s been cool to get into a company like this on the ground floor while they are doing all these great things, I am very thankful.”

Let’s talk about your brother Bryson. Are you guys twins? Is it harder to train with your brother on a daily basis or is it more beneficial in your opinion?

“No he’s my older brother but everybody thinks we’re twins, he’s four years older than me. It’s definitely more beneficial to train with him, when I’m tired and my body is sore and I don’t want to get out of bed, he’s feeling great and he pushes me to practice. When he doesn’t feel like he can make it, I push him. It’s good to have him there so we can push each other to the next level, it’s a great balance.”

Who won the fights between you guys as kids and who wins the fights these days?

“He definitely beat me up all the time when we were kids, but now that we’re bigger and grown up we don’t fight. We get all that out in the gym.”

Back to the fight this Saturday, where is your opponent most dangerous and what holes in his game will you be looking to exploit?

How do you visualize the fight going down and how do you get your hand raised?

“I’m definitely going out there to get the finish in this fight, I really don’t want it to go to the judges scorecards but a win’s a win for me.”

Tell all the fans out there why they should tune on March 29th?

“They should tune in on March 29th because this is a stacked card! You can’t get a card like this with such big names for free that often, everybody is going to go out there and get after it. It seems like World Series of Fighting puts on such great shows because guys aren’t worried about what happens if they lose, they just go out there and throw down. That makes for the best fights.”

You can check out Brenson’s fight and all the kick-ass WSOF 9 prelims at WSOF.com and be sure to tune in for the main card on NBC Sports!