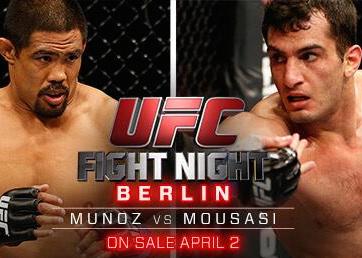 A middleweight match-up between Gegard Mousasi and Mark Munoz has been tapped as the headliner for UFC Fight Night 41 set for May 31 at O2 World in Berlin, Germany. UFC officially announced the bout on Thursday.

Mousasi (34-4-2) is currently ranked No. 12 among UFC middleweights and is coming off a unanimous decision loss to Lyoto Machida at UFC Fight Night 36 last month. Prior to that he’d been fighting at light heavyweight and had gone undefeated since losing the Strikeforce 205-pound title to King Mo back in 2010. Mousasi is 1-1 inside the UFC.

Munoz (13-4) is ranked No. 7 among UFC middleweights. He has won one of his last three bouts, most recently suffering a first round loss via head kick to Lyoto Machida at UFC Fight Night 30 in Oct. 2013. Just prior to that he had won a unanimous decision over Tim Boetsch at UFC 162 in July of last year.

Stay close to www.prommanow.com as more bouts will be announced for UFC Fight Night 41 in the coming weeks.
[ads1]
[ads2]