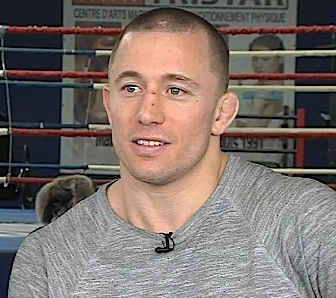 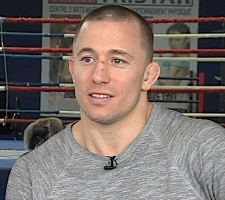 Former UFC welterweight champion Georges St-Pierre now has the luxury of enjoying MMA as a fan and no longer has to worry about the stress of who’s gunning for him next and the critics that come from being in the spotlight.

On March 15, in the UFC 171 main event, Johny Hendricks and Robbie Lawler will fight for the title left vacant by St-Pierre. In a new interview with Dallas Morning News posted Friday, the 32-year-old Canadian said he believes Hendricks has the advantage:

“I believe Johny Hendricks has an edge in the fight, especially in the grappling department, because of his experience in wrestling. He has a very good team. … I believe Johny will come more well prepared, maybe I’m wrong, that’s just my opinion.”

St-Pierre went on to describe what set Hendricks apart from every other fighter he’s faced:

“What struck me the most, his team is very good at analyzing. When I fought with him, he did things that nobody has done before. Things nobody has ever thought of. He gave me obstacles for the fight.”

“When a fight starts I’m very good at reactive takedowns, so I wait for him and his big left had. When he punched me with the big left, I ducked under and I put him down. When he came back from the corner, they were prepared for that. (His) coach said, ‘no more big left hands, go for the punch to the body so he can’t duck under.’ That is the adjustment they did. And they didn’t do that the night of the fight — that is what people don’t understand — they prepare for that. They knew it could happen and they adjusted during the fight. That gave me Hell. I was not prepared for someone that changes. Most guys I fight, they don’t change … they fight always the same way. They might try a few things left and right but they don’t transform them. I believe one of the big turning points for Johny, he did well adjusting things.”

We’ve seen Lawler struggle against high level grapplers before (i.e. Jake Shields and Jacare), but that was prior to moving his camp to American Top Team and dropping to welterweight. And when it comes to has the most power in their punches, Lawler or Hendricks, well, both these guys can end the fight with a single shot. How do you see it playing out?
[ads1]
[ads2]