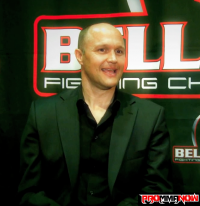 The UFC has taken a lot of heat since they implemented their discretionary sponsor tax, which can reportedly run as high as $100,000. This means if the UFC wants to they will charge a company for the right to sponsor any of their fighters. Needless to say, MMA fighter sponsorship opportunities have taken a hit because of this.

A guest on this past week’s episode of Inside MMA on AXStv, Bjorn Rebney, Bellator MMA Chairman and CEO, was asked about how his promotion differed from the UFC in terms of fighter sponsorships.

“I think we are night and day from the UFC when it comes to those subjects. First and foremost, we have no sponsor tax. We will never have a sponsor tax. Philosophically I look at sponsors as revenue that should go 100 percent to the fighters. The promoter shouldn’t be taking a piece of that, they shouldn’t be taking a commission and they shouldn’t be charging sponsors for the right to pay fighters to step inside of our cage. And look, in every sponsorship deal that we do, we look to get the fighters in those deals. We have a huge announcement coming up next Tuesday with a major sponsor that everybody knows the name of and we negotiated one of our fighters into that deal.”

Well, today is Tuesday and Bellator did indeed announce a new multi-year deal with Monster Energy drink, making them their “Official Energy Drink Partner” and they have negotiated Quinton “Rampage” Jackson into that deal. You can confirm this yourself when you watch “Rampage” take on Christian M’Pumbu this Friday night in the Season 10 light heavyweight tournament opener on Spike TV.

“When sponsorship opportunities arise like the Monster Energy alliance, fighter involvement is paramount,” Rebney said. “Bellator’s talent connects with Monster’s brand identity and as this partnership continues to develop, you will see more Bellator fighters have the opportunity to be involved with the Monster Energy brand. This benefits our fighters both financially and from an exposure perspective. It really is a win-win for everyone involved.”

If you want to know more about the UFC’s sponsorship tax and some of the issues surrounding it, check out Nate Quarry’s recent statement, as well as Luke Thomas’ rebuttal to Dana White, Actually, fighters sponsorships are the UFC’s problem.