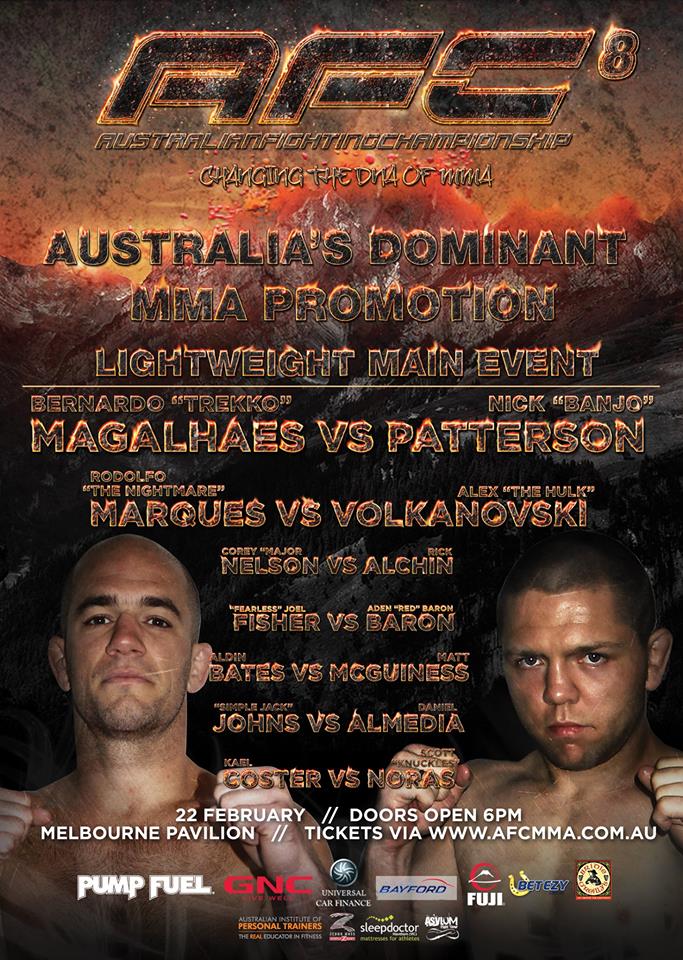 The Australia Fighting Championship is back in 2014 and we are stating off with a bang on 22 February when we very proudly present AFC 8. This card has it all… the best Bantamweights, Lightweights and Welterweights from Australia and abroad, some heavy handed big guys, BJJ black belts and of course two guys who genuinely want to rip each other apart. So lets check out the card!

One of Australia’s best Lightweight fighters Nick Patterson will take on Brazilian (and adopted Australian) Bernardo Magalhaes. Trekko has been desperate to get back in the ring but unfortunately no one wanted to step up; well that was until ‘Banjo’ came along. This main event is intriguing because of the clash in styles – Trekko is a BJJ Black Belt and has the tools to submit his opponents from any position but don’t let that take you away from his striking, Trekko can bang and let us tell you he is ready to trade leather. Working with Australia’s top MMA fighters on a daily basis Trekko is ready and plans to deliver for you the AFC fans.

Banjo is Australia’s version of an energizer bunny that has the ability to finish the fight quickly and viciously. Expect to see Nick unleash flying knees, spinning back kicks and elbows galore! He is somewhat honoured to fight a guy like Trekko but he honestly believes that he is better in all facets of the MMA game and come February 22 he plans to record the most impressive victory of his career.

So two of the best Lightweights in Australia are about to get it on; the Melbourne Pavilion crowd will go crazy and once its all said and done we will have a new #1 Contender for Daniel Hooker’s AFC Lightweight Title.

The ‘Hulk’ and the ‘Nightmare’ – a fascinating mix of speed and power, creativity and finesse and youth and experience.

Rodolfo’ Nightmare’ Marques is a BJJ Black Belt, has cardio for days and is a genuine MMA technician. Within his arsenal he has so many ways to win it’s scary, but even more intimidating is the fact that he sometimes likes to ground his opponents into the ring mat and hand out career shortening beatings. His work at Extreme MMA means he is continually refining and improving his game, this is one scary Featherweight! Rodolfo is keen to prove that he is the best Featherweight in Australia and his quest begins at AFC 8.

Alex Volkanovski is a mountain of muscle with serious KO power and an ever-improving MMA game. He also has cardio for days and extreme arm strength evident in his last AFC fight where he had a Rear Naked Choke locked in on Luke Catubig for a good 8 minutes! The Hulk is keen to show all the dimensions of his MMA game particularly his vicious ground and pound. If the Hulk gets on top of you and starts unloading some bombs the fight is as good as over! If he decides to go down that path he will have to be careful because Rodolfo can finish the fight on the ground as quickly as you can say ‘Tap Tap’! Alex’s confidence will be riding high follow his recent Lightweight title win in Roshambo so he will be looking to continue his winning ways at AFC 8.

With two quality Featherweights slugging it out fans can be assured that this will be an absolute barnburner and we wont be surprised at all if one of these guys are wearing AFC gold in the near future!!

You might have heard about bad blood fights in the past, but don’t be mistaken this could be the best bad blood fight in Australian history! Corey Nelson and Rick Alchin genuinely dislike each other and can’t wait to get into the ring and settle their differences once and for all. What started as a simple grappling contest has turned into pure hatred and at AFC 8 someone is definitely going to sleep.

Corey Nelson comes back to the AFC following immense success in the Welterweight tournament finals and is hungry for a devastating KO finish. Actually he is that hungry that he has offered to give up a percentage of his fight purse if he can’t KO Rick. A bold statement but with Corey’s striking background and intense training camp at KMA Top Team anything is possible. Riding a 6-fight win streak with ¾ of his wins coming by KO be prepared for fireworks.

Rick Alchin has put in a thorough training camp at Gracie Central Coast and is ready to confront Corey wherever the fight goes. Even though he has an impressive 6 submission victories in his career already he is very confident in his striking and believes he can punch, kick, knee and elbow his way to victory. However if that doesn’t work out, then be prepared for some floor shattering slams and brutal Ground and Pound!

The flames of hate are intensifying, and with every passing day these two get more and more hungry to beat the living hell out of each other, Feb 22 simply cant come quick enough for these guys!

Keeping with the cracking Bantamweight fights at AFC 8 our fans will again be spoilt with a fight between two of the best young fighters in Australia right now!

Training at Extreme MMA with mentor Rodolfo Marques, Joel Fisher is an explosive kick boxer who has already experienced success in the AFC and is looking to continue his hot streak come Feb 22. With the ability to finish the fight with his hands, legs, knees or elbows – stand and trade with Joel at your own risk. If the fight does happen to go to the ground Joel’s grappling his improved immensely so a slick submission is not out of the question.

Aden Baron comes to us from Phuket Top Team and on a daily basis is working with the best Mixed Martial Artists in the world including Australia’s own Robert Lisita. Aden also boasts an impressive kickboxing pedigree and has no qualms when it comes to the old ‘stand and bang’ cliché. However to further diversify his game Aden has worked significantly on his wrestling and grappling in order to become the complete mixed martial artist he yearns to be.

Don’t blink in this one folks because there is a very good chance that shin will hit chin and when it does a new Bantamweight contender will emerge.

Nothing gets more heated in sports then a good rivalry between nations; and that’s exactly what we have here! AFC fans we have England vs. Ireland in what is set to be an absolute blockbuster!

To put it simply Aldin Bates is one of the most intimidating looking guys in the AFC! As strong and muscular a fighter as we have Aldin has made a living bullying his opponents in the ring/cage and battering them into submission! Quick hands, devastating kicks and one punch KO power – Aldin is truly a guy not to be messed with.

Ireland’s Matt McGuiness is yet another protégé of the Kimekai fight team and in true Irish fashion is one of the toughest guys on the AFC roster. Seemingly fearless in his approach, Matt’s accurate and effective striking is unparalleled and he loves nothing more then to engage in a striking war. When fists start flying Matt will have a smile from ear to ear but don’t let his calm facade fool you – Matt has rocks in his hands and when they start getting thrown around, someone is going to sleep.

So who will win the battle between Ireland and England? Well there’s only one way to find out!

We all love a battle of the ‘big guys’ and that’s exactly what we have here! These two huge Light Heavyweights are ready to throw down and put on a show for the AFC fans.

Jack Johns is an ultra talented young man with the confidence to boot; then again when you’re being coached by AFC Middleweight Champion Steven Kennedy that’s just natural. Jack’s confidence is even higher after successfully obtaining a Light Heavyweight title in Roshambo last week where he displayed effective striking, grappling and dominant ground control. The other advantage in Jack’s game is he reach; with a wing span that somewhat mirrors UFC Light Heavyweight Champion Jon Jones, standing and trying to strike with Jack is a riddle that is yet to be solved and its safe to say Jack doesn’t plan on providing the answer anytime in the near future.

Daniel Almedia is coming off a lengthy break following knee surgery however after chatting with him there is no hungrier man in Australia right now! Daniel is primed and ready to unleash hell on Jack Johns. Boasting a BJJ game that is arguably the best in Australia most would think that Daniel would look for the takedown, grab a neck, arm or leg and try to rip it off! Generally when he employs this approach success soon follows; however in this case Daniel’s strategy is a little different – he wants to stand and bang! Daniel yearns for the passionate AFC fans to be standing on their seats screaming at the top of their lungs while these two fighters throw punches in bunches until one reigns supreme. I don’t know about you but this is a recipe for fight of the night if you ask us.

So this looks like the stereotypical grappler vs. striker fight on paper; however we can promise you it will be much more than that. A slugfest awaits!

With a wealth of talent currently displaying their skills in the Welterweight division in the AFC it’s a privilege to be welcoming two more tough and tested Welterweights to the AFC roster.

‘Knuckles’ Noras will make the trek from Perth to compete in the AFC for the first time and he is promising fireworks! ‘Knuckles’ loves nothing more then to stand and trade, as his nickname would suggest, he has natural sleeping pills in both hands and is extremely accurate when it comes to hitting the target. Scott is an ‘in your face’ fighter who employs a high output style which generally results in his opponents cracking and Scott’s hand being raised soon after. In the event that the fights goes anywhere near the ground the whole BJJ game isn’t Scott’s preference but if you leave your neck hanging out he will happily lock in a choke or even worse unleash so brutal ground and pound.

With a relentless work ethic and cardio for days and days Kael Coster is a kick boxer turned mixed martial artist who is looking to cement his place in the elite Welterweight ranks in Australian MMA. Training with Ed Bevlock and Nick Patterson at Kimekai MMA whilst working on conditioning at Coster MMA, Strength, and Conditioning you can be guaranteed that this young man will be ready to go come Feb 22. Kael’s kickboxing pedigree is extremely impressive; he may very well be the kick boxer in the AFC! If ‘Knuckles’ wants to stand and trade then Kael will happily oblige, however the boys at Kimekai are quickly moulding a well-rounded mixed martial artist so where ever the fight goes, Kael will be ready.

If you are looking for genuine stand up war then you don’t want to miss this fight! First clean shot wins, just a question of who’s going to land it!!

So there you have it AFC fans; matchmaker Adam Milankovic has done it again, putting on seven of the highest quality fights you could possibly want. The AFC is continually raising the bar, bringing Australia the biggest MMA events in the country. Make sure you get your tickets at www.afcmma.com.au and don’t miss out on what will be a truly memorable event.