And the Oscar goes to… Ronda Rousey 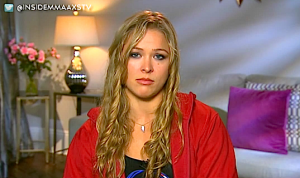 Ronda Rousey will headline UFC 170 later this month when she defends her title against fellow Olympian Sara McMann. We have learned that after that she will get the chance to be the leading lady once again, just in film. Rousey will star in two upcoming movies and will have the lead role in one of them.

Last year Rousey spent time acting in the latest version of both “The Expendables” and “Fast and Furious” franchises. Now we have learned she has booked at least too more parts this year as first she is set to start filming the “Entourage” movie in mid-March. Following that she will play the lead role in “The Athena Project”.  Can you imagine “Rowdy” as a leader of an all female Delta Force team kicking ass and taking names? Yeah me too. Reports state that Warner Bros. feels that the film has franchise potential.

It makes sense now that Rousey wanted to fight as soon as she could after defeating Miesha Tate.  Could it be we see Rousey in 2 movies a year and 2 fights a year as well? Exciting times for the young superstar. Let’s hope she can act!

One thought on “And the Oscar goes to… Ronda Rousey”