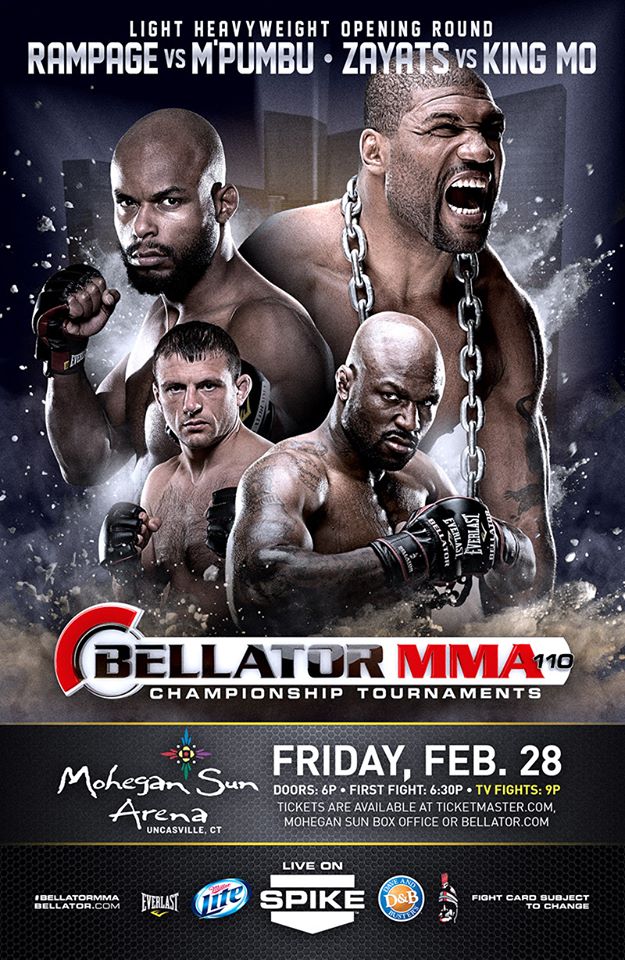 The event will broadcast live at 9 p.m. EST/ 8 p.m. CST on Spike TV. The preliminary card will be streamed live and free on Spike.com beginning at 7 p.m. EST/ 6 p.m. CST. Tickets for the event are on sale now at Ticketmaster.com, Bellator.com or by visiting the Mohegan Sun Box Office.

In one of the most stacked Bellator divisions, Connecticut’s own Matt Bessette will face the Brazilian striker Diego “Guns” Nunes in the featherweight opening round.  With a Bellator tournament run already under his belt, Nunes is ready to take the next step toward his chance to fight for the world title. For Bessette, facing Nunes will be his toughest opponent thus far in his career and he is ready to show his home state the hard work and preparation he has put in to propel his career to the next level.

“I am always excited to fight for Bellator,” Bessette said. “To be chosen to compete in the Toughest Tournament In Sports is life changing and I am happy to be given this opportunity. If I am preparing to fight the best at all times, I’ll always be ready come fight night and I have been ready for months now. Connecticut is home and Mohegan Sun will be on fire when I am in the cage on February 28th.”

No stranger to the Bellator cage, Mike Richman will look to collect another knockout as he faces the young and hungry Desmond Green.  After a fierce back and forth battle against Frodo Khasbulaev in the Bellator Season 8 Tournament Final that eventually saw Khasbulaev with his hand raised in victory, Richman will stop at nothing to get back to the finals this season.

“If feels great to be back in the tournament,” Richman said. “No questions asked, I’m coming hard this tournament. Des Green is a tough grinder and he thinks he will take me down and keep me there, I guess we will have to wait and see. He won’t see my speed, but he will feel my power.”

Entering the Toughest Tournament In Sports for the first time, Scott Cleve heads into battle against the highly-talented German finisher Daniel Weichel. With 39 professional fights under his belt, Weichel has recorded 19 victories via submission, including three submission wins in his last three fights. In order to get past the submission-artist, Cleve plans on using the momentum from his current six-fight win streak and knows he will have to be one step ahead of Weichel to advance in the tournament.

“I’ve been working hard getting ready for this tournament and I feel more than ready,” Cleve said. “I almost feel like I can go into this fight with nothing to lose. I think that my speed and ground game will be my biggest asset. Weichel is very experienced and I have to be ready for a war.”

In a battle of fast finishers, a fight between Goiti Yamauchi and Binns Managements own Will Martinez will close out the tournament bracket. At only 21 years of age, Yamauchi steps under the bright lights with impressive 16-1 professional record, including 12 first-round victories.  In a fight that will be Martinez’s toughest test yet, he is confident that he will hold his own against Yamauchi heading into this fight riding a seven-fight win streak all ending in the first round.

“I am excited beyond belief to be able to participate in the featherweight tournament,” Martinez said. “I feel like I have all of the pieces in place to make a successful run at the title. Goiti is a great fighter and the toughest opponent I have faced yet. We both love to finish fights as quick as possible. I would love to end this fight with a first round submission, but I am ready for a three-round war.”