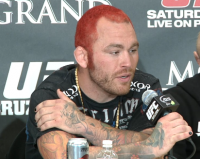 Longtime UFC middleweight scrapper and Ultimate Fighter season 1 veteran Chris “The Crippler” Leben (22-11) announced his retirement from professional mixed martial arts competition on Monday. On Tuesday “The Crippler” took to Facebook to thank his supporters and let them know that he will still be involved in MMA, coaching and cornering young fighters out of Victory MMA & Fitness in San Diego.

“Dear fans:
man, it’s been a long couple weeks pondering this real big decision. My career was one hell of a roller coaster ride. Highs and lows and everything in between, but I wouldn’t change anything. It’s made me who I am today. And without all of you, there’s no way I could have got through it. The facebook, tweets, emails, all the people that stood behind me through the ups and downs, you were my motivation and my drive. Thank you. But I gotta say, I’ve had the most fights in the middleweight division, I’ve landed the most strikes in the UFC, certainly don’t have the best record, but my opponents always knew they were getting in a fight! The UFC is the cream of the crop. The UFC athletes are getting better every year. I survived almost 10 years in the gauntlet that we call the UFC. It’s my time to bow out from competing, certainly not from this sport. Time for me to make the switch over to coaching, cornering, and helping younger fighters in any way I can. If you’re in San Diego, I’ll be coaching the team at Victory, please stop in and drop by to say hi. Yeah, I’m not going to make this a tear jerker, I’m gonna miss it, I’m going to miss you guys, thank you so much! Peace i’m out! LOL”

Honestly, was anyone NOT a fan of Chris Leben? With 22 fights inside the UFC Octagon, what was your favorite Chris Leben moment? This 27-second knockout of Wanderlei Silva has to be one of his brightest: