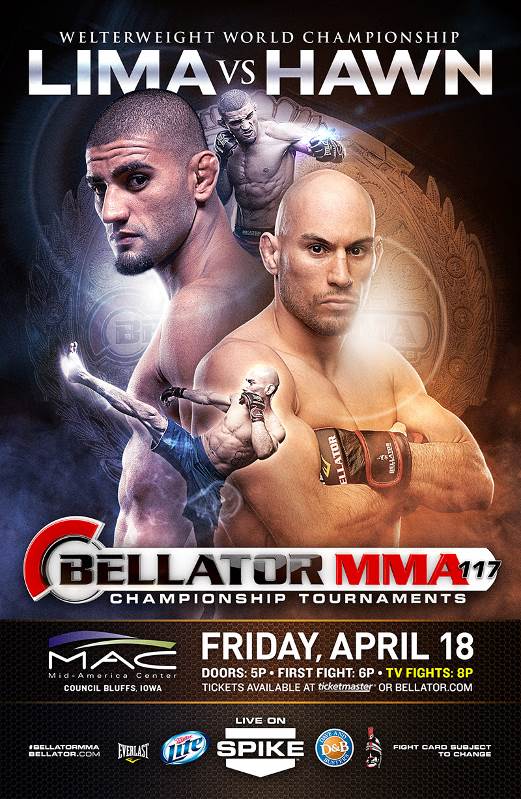 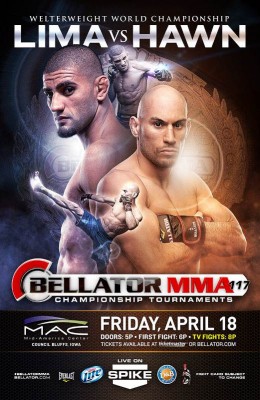 The Main Event is set for Bellator 117 as Douglas Lima and Rick Hawn will headline a packed night of fights from Iowa’s Mid-American Center on April 18th as the two clash in a Bellator Welterweight Title fight live on Spike TV.

The event will broadcast live at 9 p.m. EST/ 8 p.m. CST on Spike TV. The preliminary card will be streamed live and free onSpike.com beginning at 7 p.m. EST/ 6 p.m. CST. Tickets for the event will be on sale Friday, January 24th and can be purchased at Ticketmaster.com, Bellator.com or by visiting the Mid-American Center Box Office.

Lima enters the April 18th showdown riding a four-fight knockout streak including tournament wins over Bryan Baker and Ben Saunders that propelled the Brazilian born knockout artist into his rightful title shot. Just 26, Lima is well aware that now is the time to elevate his game to the next level, and capture his first Bellator Championship.

“This fight with Hawn is going to be very explosive, I think everyone is aware of that,” Lima said. “I really can’t describe how excited I am for this World Title shot. I’m bringing this belt home, and it’s not leaving me for a long time.”

Hawn’s road to a title shot was a unique one, as the TriStar product was a late injury replacement in the Season 9 Welterweight Tournament. Hawn made the most of his opportunity, capturing three wins in the process, including a devastating knockout over Ron Keslar in the Tournament Finals.

“It’s great to be back in title contention and going for that belt,” Hawn said. “There is no question Douglas is an incredibly gifted fighter. In terms of his size and skill, this will probably be the toughest fight of my career, and I’m ready for that. I know how exciting this fight is going to be, and I’m just ready for April 18th to get here.”

“Without using too many cliché’s, Lima vs. Hawn is just a fight fans dream come true,” Bellator Chairman & CEO Bjorn Rebney said. “Both of these are incredibly exciting to watch in the cage, and to have both of them set for a five round battle for our welterweight title is something I’m couldn’t be happier about.”

More information on Bellator 117 will be made available in the coming weeks.