EXCLUSIVE: ‘Rumble’ Johnson on Mike Kyle, WSOF vs Bellator and much more 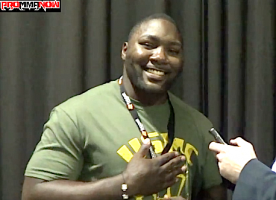 One of the many ‘must-watch’ bouts scheduled for WSOF 8 this Saturday features two men that could certainly steal the show, as Anthony ‘Rumble’ Johnson squares off with Mike Kyle. Both athletes have suffered setbacks in past months that forced this long-awaited tilt to be rescheduled twice. Now with all injuries behind them, Johnson and Kyle are finally set to meet in a fight that is almost six months in the making and sure to be fireworks!

ProMMANow caught up with ‘Rumble’ to discuss this scrap with Kyle finally coming to fruition, the frustrations of dealing injuries, continued Blackzillian success in 2014 and much more.

*Answers from ‘Rumble’ are italicized.

First off Anthony, how has your camp been leading up to this fight with Mike Kyle?

“My camp has been awesome. I honestly feel like my camp has never stopped over the past six months because the fight keeps getting pushed back, so I’m really excited to get this over with. I’m ready for this to be done, plain and simple.”

As you mentioned, this fight has been pushed back twice since September of 2013. No disrespect to your opponent, but how badly do you just want to get this fight over with?

“If it could happen right now I’d be glad, that’s how bad I want it over with. I wish we could fight right now.”

Could you elaborate on the injury that forced you to pull out of the original booking of this fight at WSOF 5?

What was your initial reaction to the fight being pulled again before the Vancouver card? Was it at all beneficial to get in a few more weeks of training or would you rather get back in the cage and make some money?“I was a little bummed out when I found out the fight was cancelled again. I was actually two minutes away from the gym and I got the phone call from my manager. He told me ‘I’ve got some bad news,’ and I was like ‘what now?’ Then he explained that the fight had to be cancelled because Mike broke his toe. At the same time I was relieved because after training for this fight over a long period of time, helping Cesar get ready for his fight, working with Vitor for his fight and helping Rashad get ready for Chael, I was tired and beat up. So everything on my body was aching at the time and I was feeling like I might not be able to make it the two weeks before the fight, but I knew I had to do it. So when I got the news, I was bummed out but also happy about it at the same time. The fight being pushed back actually helped me out more than anyone could ever know.”

So it was more of a blessing in disguise?

“It was definitely a blessing, I told my manager the next day that I was glad the fight was pushed back because I was hurting. It was to the point where my joints were hurting so bad because I was training so much and so hard, that I couldn’t pick up an empty glass. It would hurt my wrist or hurt my elbow, I was that beat up.”

Tell me about Mike Kyle, what are you expecting from him come fight-night and where do you feel he’s most dangerous?

“He’s dangerous period. I expect nothing but the best from him, I know he is going to come to fight and I always come to fight. He knows it’s in my back yard, so I think he knows he has a lot of things working against him, but he also knows that he has a punchers chance. I know I have a punchers chance too, but this fight can go anywhere and I’m going to be ready. No matter what, it’s going to be a good fight and I don’t expect anything less of Mike Kyle. I saw his fight with Andre (Arlovski), it was a pretty good fight for both guys, they both went at it. I saw his fight with CFA where he got a pretty easy win against Travis Wiuff, so we’re going to see what he’s like when he’s fighting me. I’m eager to see what he brings to this fight.”

What kind of improvements have you made since your last outing that you will be looking to showcase in this tilt?  And what weaknesses in his game will you be looking to exploit?

“Damn, you want me to tell you my game plan? As far as improvements go man, I feel like I’m just a better person and each fight I plan on coming in better and better. As a fighter, I think I’ve gotten stronger, I’ve gotten faster, I think my conditioning is better, I think everything has improved. Each fight I think I bring more and more to the table as far as what I do.”

I would like to change gears a bit and discuss the rebound year that the Blackzilian’s have had in 2013. Things were a little rough in the beginning but it seems like you guys have all really found your groove. Give me your thoughts on the teams success and continued success in 2014?

“2013 was just a preview of what we’re going to do in 2014. The year didn’t start out like we wanted it to, Sean Soriano took on a fight with like three weeks notice against Kawajiri who has like forty fights. Sean has eight. Sean went out there and showed everyone he wasn’t scared of Kawajiri, he just had more experience then Sean and it showed. I’m proud of Sean for that alone. I have my fight coming up, I’m ready to go out there and showcase to everyone what I can do and that I’m still here. My boy Rashad has a fight coming up, Abel Trujillo has a fight coming up. I think 2014 is going to be even better then 2013 and I’m eager to get the ball rolling for the team.”

The Blackzilian team is known for  the true camaraderie and brotherhood among a lot of you guys. Anyone who watches any of the behind-the-scenes stuff on the website knows it really is like a family environment. Tell me about that.

“We love each other. We’re always joking and picking on each other but we don’t take this stuff too seriously. We train hard but we know you can’t take this stuff to serious and lose yourself, you still have to be yourself, you still need to have fun and enjoy it. So we just have fun, train hard and laugh, we do everything, there’s no ego on this team.”

With that family environment, many of you guys and yourself in particular, have been vocal about not fighting each other. That seems to be a common thing among close team mates but I am wondering if you would ever reconsider your position if there was a title involved? For instance, The situation that comes to mind for me is that you and Tyrone Spong dominate the LH division in WSOF.

Speaking of light heavyweight, you also looked really sharp against Arlovski at heavyweight, which is incredible considering that only a few years ago you were competing at 170. What weight class are you planning to make your home moving forward?

“I plan at staying at 205, but like I tell everybody, if somebody asks me to fight at heavyweight I’ll do it. I’m not afraid to fight there and if the price is right I’ll do it, but first and foremost my home is 205.”

Lets move to WSOF, all of the athletes have high praises for the promotion and the staff. Tell me about you experience with WSOF so far and how happy are you working for them?

“It’s great, everyone is super cool and everybody is really starting to get the ball rolling with World Series of Fighting. It’s been fun so far, I don’t have any complaints. This is my last fight on the contract with them and hopefully we can work things out and I can stay around. Those guys are great, they don’t put any pressure on you and they treat you like a human. They know there are some things you can do and some things you can’t do. With us as fighters, we definitely love and respect that, so in return we show them love and respect.”

As I am sure you are aware, WSOF VP Ali Abdel-Aziz issued a challenge to Bellator regarding a PPV event that would pit the WSOF elite against Bellator’s best. What is your opinion on this challenge and how do you think you would match up with Atilla Veigh?

“I honestly have no idea who he is, thats no disrespect to him, I just honestly don’t know. I used to keep up with who was who when I first started my career but now I just mind my own business and focus on myself and my team. Don’t take this the wrong way, but Ali is crazy. I say that because when he has an idea he will run with it and I respect him for that. I was getting texts from friends asking me what I thought of the match-ups and I was like, ‘what are you talking about?’ They told me about it and I went to look at it for myself. I thought if this happens it would be a dope card, it would be a sellout for sure.

“They aren’t bad match-ups at all, I really liked it and it looks awesome, so I was impressed. I was like, ‘this is what’s getting on Pay-Per View in my opinion.’ If it happens it would be great, I hope it does happen but I don’t know if Bellator will accept. I do know all the guys from WSOF will step up and fight whoever they give to us, so lets do it.”

Since you and Tyrone are boys, Id also like to point out that if the proposed ‘Rampage’ vs Spong fight happens, I don’t imagine Jackson would be able to take more then 5 leg kicks without falling over.

Back to WSOF 8. How do you visualize the fight with Mike Kyle going down on January 18th?

Finally, why should fight fans tune in on NBC Sports Saturday night and what should ‘Rumble’ Johnson fans anticipate from you in 2014?

“They should expect the best ‘Rumble’ they have ever seen in 2014, and why should fans tune in on NBCSports on January 18th? ‘Cuz I’m on the card! Seriously though, this card is going to be awesome.”

Make sure you tune in for WSOF 8 live on NBCSports tomorrow at 9 p.m. ET/ 6 p.m. PT! Check your local listings.

For the latest MMA news and all things awesome, ProMMANow has got you covered!