ONE FC: War of Nations set for March 14 in Malaysia 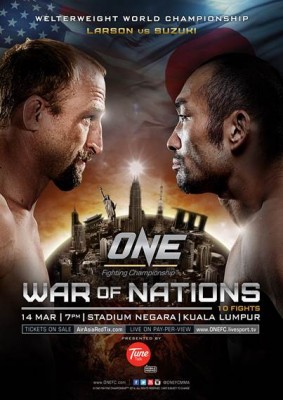 ONE Fighting Championship™ (ONE FC), presented by Tune Talk, returns to Malaysia for another blockbuster event on 14 March 2014 at the iconic Stadium Negara. The main event will crown ONE FC’s first Welterweight World Champion when Nobutatsu Suzuki and Brock Larson clash inside the ONE FC cage.

Two of the top Bantamweights in Asia, Kevin Belingon and Dae Hwan Kim, will meet in the co-main event while Adriano Moraes battles Yasuhiro Urushitani in Flyweight action.  ONE FC: WAR OF NATIONS will also see the heavily anticipated rematch of Asia’s top female mixed martial artists as Sherilyn Lim takes on Ann Osman. Malaysian MMA fans can also look forward to the return of Malaysian MMA star Peter Davis, who’s opponent will be announced at a later date.

Priority sales of tickets for ONE FC: WAR OF NATIONS, presented by Tune Talk, will begin from 13 January. Fans can enjoy 30% off tickets during priority sales which end on 1 February.  Pre-sale packages such as the “Ann Osman Fan Package”, which includes a limited edition T-shirt for only MYR78, are also available now. Log on to www.AirAsiaRedTix.com for further details. Tickets are priced at RM348 for the complete VIP experience that includes exclusive red carpet entrance, access to the VIP lounge and premium cage-side seating. The categories that follow are priced at RM248, RM148, RM98 and RM48 respectively. Booking fees and service charges apply.

CEO of ONE Fighting Championship™ Victor Cui stated, “Following the resounding success of ONE FC’s jam-packed events in Malaysia in 2013, we are returning to Kuala Lumpur with one of the best cards in the organization’s history. Fans around the world have been eagerly awaiting the next ONE FC World Championship title belt to be introduced, and now, the wait is over. The ONE FC Welterweight division is filled with the most talented mixed martial artists in the world and we will crown the best of the best when Nobutatsu Suzuki meets Brock Larson. Our passionate fans in Malaysia will be treated to a night of unforgettable mixed martial arts action!”

Nobutatsu Suzuki is a fighter who has proven that he has knockout power. He has a record of nine knockouts out of ten wins, which gives him one of the highest percentages of stoppage wins via knockout in all of MMA. Suzuki is famous for being the first fighter in Asia to showcase the incredible striking power of Karate in an MMA context. The Kyokushin Karate black belt last fought at ONE FC: RISE TO POWER, defeating one of MMA’s most experienced combatants, Phil Baroni, by TKO. Suzuki will be looking to use that power to earn a ‘Knockout of the Night’ bonus and leave with the coveted ONE FC World Championship title belt.

Brock Larson is a highly experienced fighter who has more than 40 fights in several top organizations across the world. He made a successful ONE FC debut last year when he defeated feared Dutch kickboxer, Melvin Manhoef, via unanimous decision. He now gets an opportunity to cement his legacy when he faces another elite striker in Nobutatsu Suzuki. His 26 submission victories are testament to Larson’s grappling prowess, which he will likely utilize to propel him to victory and emerge as the first ever ONE FC Welterweight World Champion.

Kevin Belingon is the Philippines’ top Bantamweight and has already proven he can compete against the best in the world in his battles against Soo Chul Kim, Masakatsu Ueda, Yusup Saadulaev and David Aranda. He showcased his striking prowess by knocking out his opponent in devastating fashion in his last fight, and will look to do the same to his Korean opponent Dae Hwan Kim.

Dae Hwan Kim is undefeated in nine professional mixed martial arts bouts so far. He made a successful debut in Asia’s largest mixed martial arts organization last December, defeating Australian grappler Thanh Vu via submission. Kim is never afraid to brawl and consistently puts on Fight of the Night performances.  Belingon will be his toughest test to date and Kim will move one step closer to a title opportunity as well as maintain his undefeated record if he can overcome the Filipino.

The rematch between Sherilyn Lim and Ann Osman is one of the most heavily anticipated bouts of 2014. Lim won the first bout via split decision after three back-and-forth rounds which had the 12,000 fans in attendance at the Singapore Indoor Stadium jumping off their seats. Lim will once again be representing Singapore’s oldest mixed martial arts gym, Fight G. She has been part of Fight G since 2007, when she joined their Muay Thai program, and has been training under the tutelage of Singaporean MMA pioneer Darren De Silva. Sherilyn has quickly established herself as the best female mixed martial artist in Singapore and will showcase her talents again in March.

Ann Osman is Malaysia’s first female mixed martial artist and has captivated the nation with her infectious personality and indomitable fighting spirit. She trains out of Borneo Tribal Squad in the mountainous region of Kota Kinabalu in East Malaysia. Osman will enjoy the support of her countrymen this time after coming up short despite a valiant effort in Singapore. Her impressive takedowns and vicious ground-and-pound may prove to be the decisive factor in this Women’s Straweight bout.