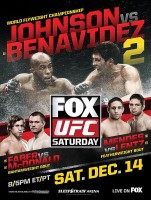 The UFC flyweight title is on the line tonight as champion Demetrious Johnson faces Joseph Benavidez in a rematch from their Sept. 2012 bout in which Johnson took home the inaugural UFC 125-pound strap via split decision. In the co-headliner veteran superstar Urijah Faber takes on 22-year-old knockout artist Michael McDonald in a bantamweight showdown.

ProMMAnow.com will provide LIVE results and play-by-play commentary of all the action right here.

Round 1 – Left from Danzig as Lauzon tries to get inside with punches. Lauzon gets a body lock takedown; takes top control in half guard. Lauzon gets full mount, drops a big elbow, goes for an armbar, Danzig steps over for the escape, now on top inside full guard trying to work the ground and pound. Lauzon with feet on hips, scrambles to his feet. Nice body shots from Danzig, Lauzon turns him to the cage. Danzig turns him around. Looking for a takedown. Lauzon gets a body lock and trips Danzig to his back. Lauzon inside full guard, trying to pass before the bell. PMN sees it 10-9 Lauzon.

Round 2 – Leg kick Danzig. Left hook. Leg kick. Nice left from Danzig, then a body shot. Clinch, body shots, elbow, knee, elbow. Knee from Lauzon in the clinch. Nice left to the body, right to the head from Danzig. Left from Danzig. Leg kick Danzig. Left from Danzig. They trade knees to the body. Lauzon gets a takedown, now inside full guard. Lauzon cuts Danzig with an elbow and blood is all in his eyes. More elbows from Lauzon from top. Lauzon moves to half guard, continues to work ground and pound. Danzig gets butterfly guard, but Lauzon postures up with a big elbow, moves to full mount, then goes for an armbar with 10 seconds left. PMN sees it 10-9 for Lauzon.

Round 3 – Body shots, head kick from Danzig. Not much on it. Nice right, leg kick from Danzig. Big right hand, leg kick from Danzig. He takes an accidental head butt and Big John checks him out and warns Lauzon. Danzig teeing off on Lauzon now with big body shots and punches. Nice elbow, and a knee from Lauzon, then a trip takedown. Lauzon passes from full to half guard. Drops some nice elbows, moves to side mount and dropping elbows and punches from the crucifix position. Lauzon gets mount and drops huge elbows, looks to set up an armbar, elbows to the ribs to soften Danzig up, loses position as Danzig takes top control. Lauzon gets to his knees and puts Danzig on his back, in half guard. Lauzon moves to side mount, drops a huge elbow before the bell. PMN sees it 10-9 and 30-27 for Lauzon.

Round 1 – Big leg kick from Mendes. Lentz gets tagged and shoots in. Mendes defends the takedown and fires back with punches. Lentz with a body kick. Leg kick Mendes. They square up. Lentz gets tagged again, bleeding from his nose. Mendes puts him on his back, inside full guard. Lentz back to his feet. Leg kick, left hand from Mendes. Leg kick Lentz, he shoots, stuffed. Left hand Lentz. Takedown from Mendes. Lentz holding his neck guillotine style but Mendes pops out, holding Lentz down. Body shots from Lentz, he escapes to his feet. Leg kick. Mendes shoots, gets the takedown again. Mendes just holds him there until the bell. PMN sees it 10-9 Mendes.

Round 3 – Leg kick Mendes. Body kick Lentz, right hook. Left hand from Lentz and Mendes goes down, gets right up though. Eats a left hand. Mendes shoots, stuffed. Body kick Lentz. Leg kick Mendes. Right hand from Lentz. Right from Lentz, left from Mendes. Lentz with a body kick. Mendes gets a takedown but Lentz immediately up. Mendes with another takedown but Lentz right back up. Thai clinch and knees from Lentz, lands a big left hand. Flying knee from Mendes drops Lentz. Mendes jumps on a guillotine, Lentz is safe but still on bottom. Lentz gets to his feet but eats a right. Mendes doesn’t look happy with his performance. PMN sees it 10-9 and 30-27 for Mendes.

Round 1 – Touch gloves. Head kick from Faber, followed by a takedown. Faber inside full guard. Faber picks him up, puts him back down, still in guard. McDonald with high guard for a moment. Faber  with a couple body shots and ground and pound. Boos from the crowd. Right hand from Faber from the top. Elbows to top of the head from McDonald. Ref wants work. Body shots from Faber. Big John stands them up. Leg kick Faber. Overhand right. Body lock from McDonald, tries for a takedown, no dice. Front kick Faber. Head kick attempt. Nice knee from McDonald as Faber moves in fast. McDonald just misses a big left hook. McDonald looks so much bigger than Faber. Left hand from Faber. PMN sees it 10-9 Faber.

Round 2 – Leg kick Faber. He shoots, stuffed. Left hook from Faber. Leg kick inside goes high, time called. Big overhand right from Faber rocks McDonald, front kick to the face follow up from Faber. He comes in and gets tagged with a right that halts the attack. Faber putting on the pressure. Left hand lands, front kick to the body. Left hook McDonald, mostly blocked. Leg kick McDonald. Faber hurts McDonald with a big right, he chases him down, lands another, then locks up a guillotine and McDonald taps out. Amazing performance from 34-year-old Urijah Faber!! He also gets a finish on a card filled with decisions. McDonald raises Faber’s hand.

Round 1 – Leg kick Benavidez. Again. Johnson goes for a single leg, no dice. Leg kick from Johnson. Benavidez counters with his own. Right hand from Benavidez. Johnson catches Benavidez on the chin with a right coming in. Benavidez goes down and Johnson finishes him off and becomes the first person to ever stop the Team Alpha Male fighter. Hugely impressive performance from Mighty Mouse!!

Check out the GIF courtesy @ZProphet_MMA: