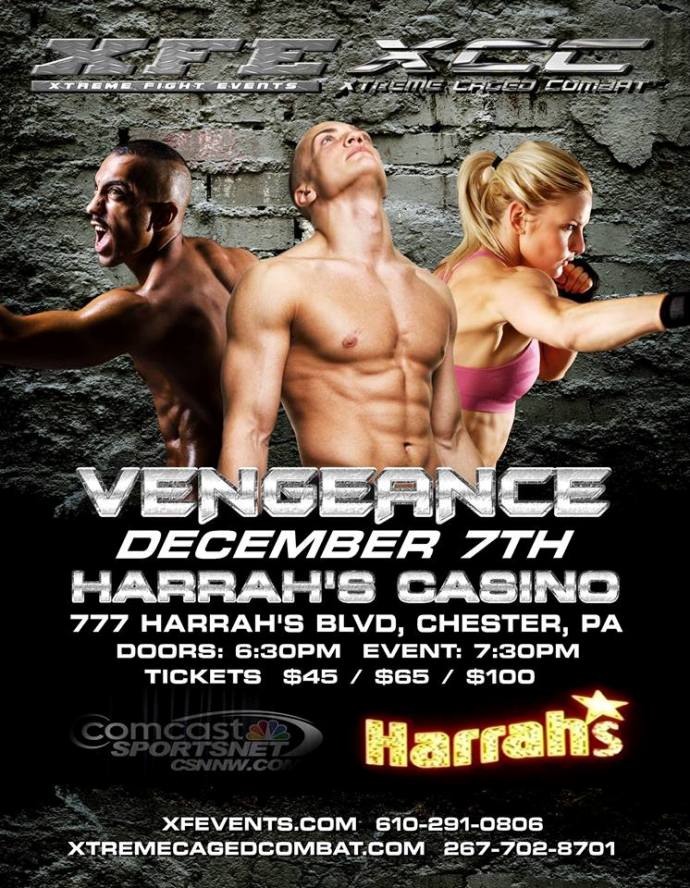 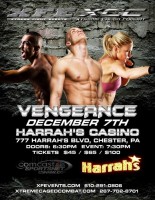 Xtreme Fight Events returned to Harrah’s in Pennsylvania with “XFE 31”
with another high octane event. The 8-bout card featured 5 finishes.  XFE
is the #1 MMA organization in Pennsylvania and one of the best in the
whole Northeast as XFE is where the top pro and amateur rising stars step
into the battleground looking to destroy their opponents.

In the main event, Shedrick Goodridge (4-6) defeated Elder Ramos (4-4) via
TKO/doctor stoppage in the second round.   In round one, Goodridge and
Ramos traded leg kicks looking for an advantage.  Ramos grabbed a kick and
clinched up with it, looking for a takedown.  After separating, the
southpaw Goodridge scored with a straight left hand before Ramos got the
takedown.  Goodridge wall walked back to his feet and they squared off
again before Ramos closed the distance and got another clinch.  Goodridge
scored with a knee and elbow as they separated once again.  Ramos executed
a nice takedown and moved to side mount where he scored with punches as
the round ended in a nice back and forth battle between the two.  In round
two, Goodridge stayed at a distance and began to score with punches and
kicks.  Goodridge connected with a head kick then a knee as a huge cut
above the eye of Ramos opened.  Ramos was still game, and closed the
distance and got another clinch.  The ref halted the fight because of the
huge gash over the eye and after the doctor took a look at it, the fight
was stopped and Goodridge was the victor.  It was an action packed main
event, and hopefully these two can fight again in the near future.

After the fight, Goodridge exclaimed, “I feel awesome.  All of the work
that came through.  I had to stay away from my family.  All that I went
through to win by TKO, I thank God for that!”

In the co-main event, a fight that could have gone either way, we were
blessed to witness a ton of high quality MMA action.  Both men were able
to make a case for victory, Brown dominated on the feet but Willey
controlled the fighting the ground and take downs.  Every time Brown would
start to control the action on their feet, Willey would score a tremendous
take down.  The fight simply came down to what the judges preferred and
these judges were all in agreement.  After the final bell, the judge’s
scored the bout 29-28 all in favor of Nick Willey.  Willey, with the win,
moved to (6-2) while Brown drops to (5-2).

With Victory, Willey had this to about possibly moving on to the pro
ranks, “I might just go pro.  I have to talk to my team about that.  I
wouldn’t mind winning an “Ammy” title.  I lost 2 shots already but the 3rd
is a charm!”

If you missed this event LIVE, fear not, you can order it NOW on GFL
OnDemand!  Witness this entire card from start to finish by clicking the
link below:

Other Results from XFE 31:

Justin Lesko put on a clinic against Sougoule during the 1st 2 rounds of
their encounter.  Lesko dictated the opening rounds both on his feet and
on the ground.  Lesko seemed more slick on the ground while he out worked
Sougoule.  Sougoule had his moments using his reach and seemed to have
flipped the script in the 3rd but Lesko was up on the cards and content on
surviving.  After the final bell the judge’s scorecards read 29-28 Lesko,
29-28 Sougoule & 29-28 for your winner, via split decision Justin Lesko.
Lesko maneuvers his way to (5-2) while Sougoule plummets to (2-1).

After the fight, Lesko had this to say about his victory, “I am proud of
my performance.  I am not use to fighting someone so long compared to me.
He used his reach and made it a tough one.  On to the next fight so time
to eat!”

Chris Lewis, showed a ton of heart in his 3 round bout against Patrick
Augustine.  Lewis consistently tried to keep the fight standing but
Augustine would not have any part of it.  Lewis in the 1st rounds was able
to control the fight n the ground avoiding Augustine’s submission
attempts.  Lewis started to fade in the 3rd and final round but Augustine
was unable to take advantage while Lewis continued to push forward.  After
the final bell, the judge’s scorecards ready 30-27 across the board for
your winner, via unanimous decision, Chris Lewis.  Lewis jumps to (1-0)
while Augustine stumbles to (0-1).

Lewis was very thankful after his successful debut, “I want to thank God.
I want to thank Team Quintella MMA and Brazen Boxing.  Thanks to all of my
friends”

The heavyweights, as usual in MMA, did not fail to impress.  Both men
engaged in a slug fest from the onset.  Kowalchick was controlling Heim in
the 1st round with aggression and superior striking.  In the 2nd
Kowalchick started to fade allowing Heim to seize striking opportunities.
After the bell in the 2nd, Kowalchick informed the referee that he could
not continue forcing the referee to call for the final bell.  The TKO
victory moves Heim up to (2-0) while Kowalchick drops to (1-1).

Heim had this to say after his impressive TKO victory, “It was a great
fight!  Thanks to Chuck for fighting me.  Thanks to my beautiful wife and
my daughter who is 6 days old”.

In other action, John Beck (1-0) defeated Nathaniel Lewis (0-1) via side
choke submission in the second round of a pedal to the metal fight.  Beck
got a trip takedown then went for a kimura from the mount before
transitioning to an armbar attempt.  Lewis defended well and escaped as
Beck got mount once again.  Beck almost had the kimura on his second
attempt, but Lewis would not tap and Beck changed up to landing strikes
before going for another armbar attempt as the round ended.  In round two,
Lewis threw a spinning side kick before they fell to the mat again with
Beck in the mount.  Lewis slapped on a guillotine choke but Beck popped
out.  Beck again went for a kimura lock before switching up to a side
choke where he finally got the tapout.  This was a great grappling fight
and Beck went for submission after submission and finally put away Lewis
who displayed tremendous heart in not tapping out sooner.

Beck didn’t have much to say when we caught him after the fight except
that he was “feeling great” and in 2014 he plans to “keep fighting”.

Paul Turner, a veteran of the US Military, came out strong in the amateur
MMA debut.  His opponent Roy Koforth had his experience seemingly as an
advantage but that didn’t play a part in the result at all.  Turner was
able to dominated Turner on his feet and on the ground for the 1st 2
rounds.  Eventually in the 3rd, Turner was able to lure Koforth into an
arm bar forcing the submission at the 30 second mark.  Turner notches
first win (1-0) while Koforth suffers his 4th defeat (1-4).

Turner had this to say following his tremendous victory, “This is a dream
come true.  Out of the Military into my MMA career.  Hopefully I will be
able to turn pro soon.  Hopefully people will keep buying tickets because
I will keep fighting here until

Both men went to war from the opening bell.  Trading punches back and
forth throughout the entire 1st round gave everyone watching the inkling
this bout would not see the distance.  The inkling became a reality at the
30 second mark in RD.  Encarnacion dropped Nguyen with a right but Nguyen
scrambled to his feet only to be dropped by another vicious right hand
forcing the ref to halt the action.  Encarnacion climbs to (1-2) while
Nguyen drops to (1-2).

Encarnacion had the following to say about his win, “Little stepping
stones in my career.  My main goal is to be a world champion so you have
to step on little stones on your way to the top!”