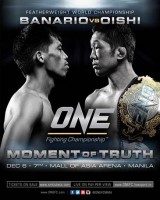 ONE FC 13 has wrapped in the Phillippines and it was a solid night of action for Victor Cui and company. The event dubbed “Moment of Truth” featured a rematch between champion Koji Oishi and Honorio Banario for the featherweight title.  Oishi knocked out Banario in the first encounter and put a stamp on the feud with a third round TKO in the rematch. A huge knockout ended the co-main event midway through the first round when Kevin Belingon defeated David Aranda Santacana with a huge punch that is highlight reel worthy.

ONE FC 13 took place at Mall Of Asia Arena in Pasay City, Philippines and aired live via online pay per view. Here are your results from the evening.