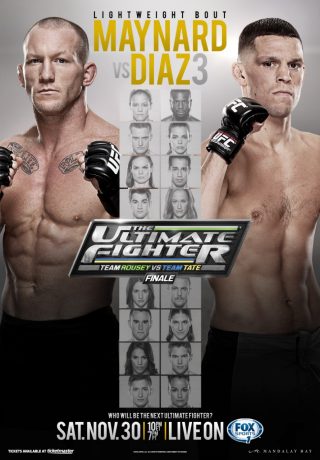 ProMMAnow.com will provide LIVE results and play-by-play commentary on all of tonight’s action. Join in for the discussion.

NOTE: College football has gone into overtime on Fox Sports 1, delaying the broadcast of the TUF 18 Finale.

Round 3 – Body kick exchange. Rosholt goes for a single and gets Harris on his back after lifting him up for a hard slam. Rosholt landing some ground and pound from half guard. Rosholt dropping elbows. Rosholt keeps Harris on his back the rest of the round. PMN scores the round 10-9 and the fight 29-28 for Rosholt.

Round 1 – It’s Brazil vs. Finland in this Featherweight match-up. Leg kick Yahya. Niinimaki with a overhand right. Yahya with a single leg takedown, Niinimaki locks up Yahya’s neck with a guillotine attempt. Yahya escapes but gets put on his back. Yahya goes for a leg. Niinimaki trying to land some shots as Yahya goes for the foot, they roll. Yahya ends up on top but Niinimaki reverses, now locked in a scramble on the ground. Yahya ends up taking his back, one hooks in, goes for the neck but Niinimaki gets to his feet and puts Yahya on his back, gets side mount, looking for the crucifix position. Niinimaki now in half guard, tries to pass. Yahya scrambles but ends up on his back eating hammerfists. PMN scores it 10-9 Niinimaki.

Round 2 – Right from Yahya, clinch, dirty boxing, he presses Niinimaki to the cage. Tries to drag Niinimaki down. Niinimaki defends, gets a takedown on Yahya. Yahya goes for a guillotine, Niinimaki reverses and takes top control in side mount. Niinimaki dropping elbows. Yahya gets half guard. Referee Kim Winslow stands them up. Nice front kick knocks Yahya against the cage. Niinimaki shoots but gets caught in a guillotine. Yahya cranking it. Niinimaki pops his head out and drops some shots. Stands over Yahya, sits down in half guard, postures back up with a punch before the bell… the punch missed. PMN scores the round 10-9 Niinimaki.

Round 3 – Niinimaki with a quick takedown, lands in side mount. Tries to work some ground and pound, Yahya gains half guard. Knees to the body from Niinimaki. Ref stands them up. Leg kick Niinimaki, Yahya counters with a leg kick. Niinimaki shoots, gets caught in Yahya’s guillotine. Niinimaki lands some body shots and escapes. Yahya still has top control though, lands a few short elbows. 30 seconds to go. Yahya  briefly looks for a kimura, lets it go but maintains top control until the bell. PMN scores the round 10-9 for Yahya, but the fight 29-28 for Niinimaki.

Round 1 – Right front kick and a couple rights from Blanco before he puts Akira on his back. Akira starts to get up but eats an illegal knee on the way up. Corassani says he can’t see and when he tries to sit up falls over several times. This fight is over and is ruled a disqualification.

Round 3 – Left right from Duke. Couple body kicks from Duke, again. Thai plu and knees. Morgan with a knee, another. Duke gives it back with a big punch combo to follow. Presses Morgan to the cage. Duke looks for a takedown, landing some punches in the process. Duke drags Morgan to the ground with a headlock. Morgan ends up on Duke’s back, one hook in and looking for the choke. Duke is able to spin around to half guard. Morgan on top now landing some ground and pound. Ref stands them up. Now Duke starts teeing off on the feet, lands a big right before the bell. PMN scores the round 10-9 and the fight 30-27 for Duke.

Round 2 – Holdworth lands a high kick to the noggin. Grant catches the leg and tries to dump him. Grant with body shots, front kick. Nice left to the body. Holdsworth pushes him to the cage and gets a single leg takedown. Grant bleeding from his nose. Holdsworth in control from side mount, landing some ground and pound. Grant gets to half guard, scrambles, Holdsworth takes his back with a body triangle. Holdsworth gets the rear-naked choke locked in and Grant taps out.

Round 1 – Right from Rakoczy, Pena ties her up and puts her on her back. Pena on top in half guard. Pena postures up and Rakoczy kicks her back and gets to her feet. Pena pushes her to the cage. They struggle in the clinch until Pena puts her down on her back again. Pena on top in half guard. Pena lands some right hands, passes to side mount. Pena gets to full mount and postures up with punches. Rakoczy bucking up but unable to escape so far. Pena unleashing big punches and elbows from the mount. She unleashes a flurry of punishment until ref steps in with less than 10 seconds left in the round.

Round 1 – No glove touching here. Diaz showing a jab. Maynard tries to close the distance. Maynard gets a single leg relatively easy. Diaz on his back with full guard. Maynard pushes him to the cage. Diaz gets to his feet, uses a trip to put Maynard down, back to the feet quickly thouh. Maynard cut over his right eye. Leg kick Maynard. Front kick from Diaz. Right hook from Maynard. He shoots, stuffed. Diaz drops Maynard with a punch, backs him to the cage with big combos, Maynard rocked. Diaz unloading on Maynard with big punches, Maynard out on his feet and the ref steps in to stop it. Maynard tries to walk it off but falls to his knees. Wow! Beautiful performance from Diaz.