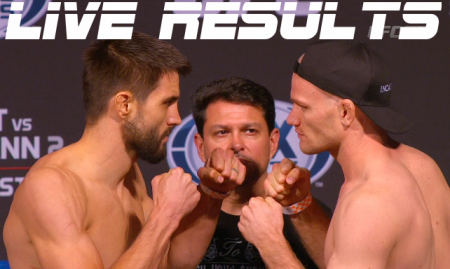 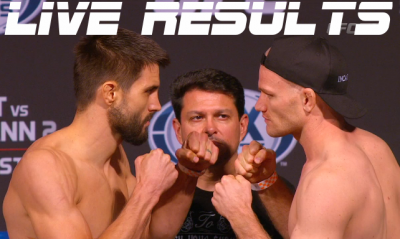 The main card will broadcast LIVE on FOX Sports 1 at 8 p.m. ET, with prelims starting on Facebook at 5 p.m. ET and FOX Sports 2 at 6 p.m. ET. ProMMAnow.com will provide quick results for the prelims and play-by-play of the main card.

Round 1 – Big leg kick from Tavares. Another. Bubba goes high, checked. Tavares goes high and misses. Bubba checks a leg kick. Tavares with a leg kick. Straight left from Bubba, he clinches Tavares against the cage. Tavares escapes to the center. Looks for a right hand. Bubba fires back with a left, does not land. Nice one two from Bubba but eats a counter left hook. Leg kick Tavares. Body kick, takedown from Tavares. Let’s him up. Tavares fires off a punch combo. Bubba shoots for the takedown, Tavares defends. Bubba presses him to the cage, lands a low knee, brief time called. Bubba with a couple of knee kicks. His lead right leg is quite red. Bubba with the clinch. Tavares turns him to the cage. 30 seconds to go. They trade knees from the clinch. They separate to the center. Body kick Tavares. PMN sees it 10-9 Tavares.

Round 3 – Touch gloves. Right body shot from Tavares, leg kick. Nice left hand from Bubba stuns Tavares. Clinch against the cage. Knees from Tavares. He backs out. Bubba being more aggressive. Kick straight to the groin from Tavares and Bubba falls to the canvas. Time out immediately called. Touch gloves. Bubba shoots and gets a nice takedown with 3 minutes to go. Bubba takes top control in half guard. Tavares defending well as Bubba tries to pass. Tavares looking for a kimura from the bottom. Bubba gets free of it. Tavares gets to his knees, tries to roll. Bubba inside full guard now with 90 seconds left. One minute to go. Bubba in half guard now. Bubba goes for the mount. Only 20 seconds left and this fight is slipping away from him. PMN has it 10-9 for Bubba, but the fight 29-28 for Tavares. Tavares improves to 6-1 inside the UFC.

Round 1 – Body kick from Perez, Mizugaki unloads punch combos. Left hook from Perez scores. Leg kick Perez. Left hand. Right hook. Both guys being very aggressive. Flying knee, right hand from Perez. Right hook Perez. Right hand from Mizugaki. Perez gets the takedown, scoops Mizugaki’s legs to prevent him getting up. Mizugaki’s back to the cage. Perez dripping blood from his nose. Mizugaki gets to his knees, then feet. Perez drops levels and scoops the double. Mizugaki fighting to get to his feet, turns Perez to the cage. Perez escapes to the center as Mizugaki backs up.  Perez catches a leg kick, pushes Mizugaki to the cage, looking for the takedown. Gets him down. Perez can’t hold him there as Mizugaki gets to his feet, eats a knee to the body. Mizugaki with a nice takedown, scramble, takes Perez’s back, one hook in, knee to the face. Perez turns him around to the cage, drops levels, time is up. PMN sees it 10-9 Perez.

Round 3 – Leg kick Perez. Nice left right counter from Mizugaki. Body kick from Perez. One two from Mizugaki. Teep from Perez. Left from Perez but Mizugaki fires back with punches and scores a takedown. Perez is up and free though right away. They square up. Perez shoots, gets the double leg.  But Mizugaki gets to his knees. Perez tries to get to his back. Mizugaki defends, gets to his feet, scores a body lock takedown of his own. Now on top inside full guard. Half the round down. Mizugaki takes his back, locks in the choke with a body triangle but somehow Perez escapes to his feet and lands a punch. Mizugaki fires back. Perez shoots for the takedown as Mizugaki posts on one hand. One minute to go. Mizugaki to his feet, clinched, turns Perez to the cage. 30 seconds left. Body shots from Perez. Mizugaki lets his hands go before the bell. PMN scores it 10-9 and 29-28 for Mizugaki.

Round 1 – Leg kick Gastelum. Right counter from Melancon. Gastelum with a takedown. Melancon right up, clinch against the cage. Knee from Gastelum to the body. Melancon escapes to the center. Gastelum shoots, right hook on the break. Gastelum being very aggressive. Body kick, blocked, right hook from Gastelum scores. Leg kick inside from Melancon. Body kick from Gastelum looking light on his feet. Lands a huge punch combo, and a uppercut that drops Melancon. He hops on his back, locks in the choke and taps out Brian Melancon. Absolutely beautiful performance. Keep an eye on this young man only 21-years-old.

Round 1 – Kampmann shoots straight away, presses Condit to the cage, stuffed. Goes for the trip and eventually gets it. Now on top inside Condit’s full guard. Condit pushes off the cage, tries to roll. Goes for a kneebar. Recovers full guard. Kampmann postures up with punches but Condit defends very well; nothing scores. Condit scrambles to his feet but Kampmann gives him a small suplex and gets Condit’s back briefly. Condit ends up on top in half guard. Lands some punches as Kampmann gets up. Condit with an elbow. Clinch wrestling now. Kampmann drops levels and gets Condit back to the mat. Now inside full guard. Condit looking for a kimura, lets it go. Boxes Kampmann’s ears. Condit scrambles to his feet. Lands a couple elbows after taking ak nee from Kampmann. Half a minute to go. Condit misses a few kicks, lands a knee. Left hook. Kampmann gets a single leg takedown. PMN has it 10-9 Kampmann.

Round 4 – Kampmann shoots, trips up Condit. Condit right up, eats a right. Jab from Kampmann. Body kick, right left from Condit, Kampmann is hurt and Condit pours it on with a left hook liver shot that hurts Kampmann. Condit follows up with more punches, Thai plum and knees to the face put Kampmann down and out. Condit doesn’t even look taxed. The Natural Born Killer shows Killer Instinct.