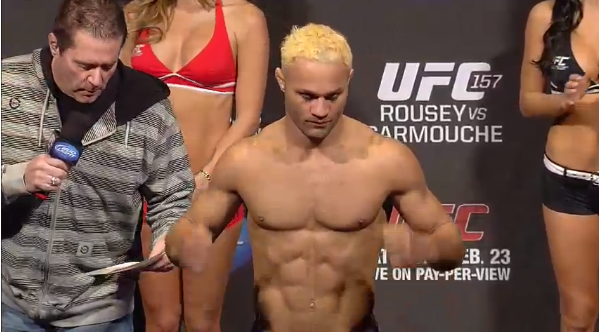 UFC officials have announced another fight for the upcoming UFC 167 event that’s slated for November 16 at the MGM Grand Garden Arena in Las Vegas. A welterweight scrap between Tyron Woodley and Josh Koscheck has been verbally agreed upon to take place on the card.

UFC 167 will be headlined by the UFC welterweight title fight between champion Georges St. Pierre and challenger Johny Hendricks.

Woodley (11-2) is coming off a somewhat controversial split decision loss against Jake Shields at UFC 161 in June. Woodley made his UFC debut with a 36 second KO win over MMA veteran Jay Heiron in February.

Koscheck (17-7) is coming off a TKO loss against Robbie Lawler in his last outing at UFC 157 in February. Koscheck came into that fight off a close split decision loss to the current number one contender Johny Hendricks in May 2012. Koscheck has been littered with injuries over the past couple of years, and was forced to pull out of a bout against Demian Maia at UFC 163 due to an injury.

Stay tuned to ProMMAnow.com for more UFC 167 news and coverage.