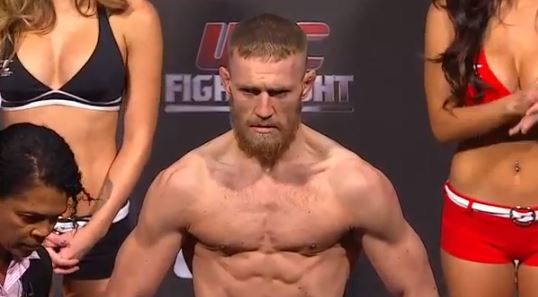 If you are a fan of Mixed Martial Arts then there is no way you could have avoided hearing about the UFC’s newest rising star Conor McGregor. The Irishman scored his second consecutive win inside the Octagon this past weekend at UFC Fight Night 26, defeating Max Holloway via unanimous decision in a featherweight contest.

Popular for his aggressive fighting style and entertaining personality McGregor has hit the UFC like a breath of fresh air. This comes at a time when people are complaining about boring matchups and fighters adopting a lay and pray style of attack, so there is no mystery behind why everyone is talking about Conor.

Lets take a look at three reasons why I think he can go all the way to the top.

At the UFC Fight Night 26 post-fight press conference Conor expressed his frustration at not being able to end the bout within the allotted three rounds. He also went on to explain that he likes to finish fights. Now, this might sound like a passing statement to those of you who are not really familiar with McGregor’s history, but I can tell you this guy is no stranger to knocking his opponents out. He has finished nine of his foes via TKO, seven of which came in the first round and three via KO. An interesting fact is that Conor’s fight against Max Holloway was his first ever to go the distance, therefore it was his first time experiencing a decision from the judges, so you can understand why the kid was frustrated about not getting the finish.

A proven track record of success

McGregor first experienced success whilst fighting on the regional circuit in Ireland. He has a record of 14-2, with his only two losses coming via submission during the early stages of his professional MMA career. Since losing to Joseph Duffy at Cage Warriors 39 in November 2010 Conor has gone on a ten fight winning streak. He won his first ever title at Cage Warriors 47 in June 2012, where he scored a second round submission victory over Dave Hill to become featherweight champion. He then followed that up by winning the lightweight title at Cage Warriors 51 in December 2012, where he picked up a first round KO win over Ivan Buchinger. After becoming champion in two weight classes he then got a call from the UFC.

UFC president Dana White has been talking about bringing a UFC event back to Ireland for a while now, so a native fighter like Conor McGregor stepping into the limelight works well for any event they may have in the pipeline. Also, Irishmen seem to have fighting in their blood, having produced a long line of world class boxers like former WBO middleweight and super-middleweight champion Steve Collins, who amassed an impressive record of 36 wins and only 3 losses during his professional boxing career. Lastly, with Conor McGregor’s positive attitude and dedicated approach to training paired with the “Luck of the Irish” it’s hard to imagine him not making it to the top.