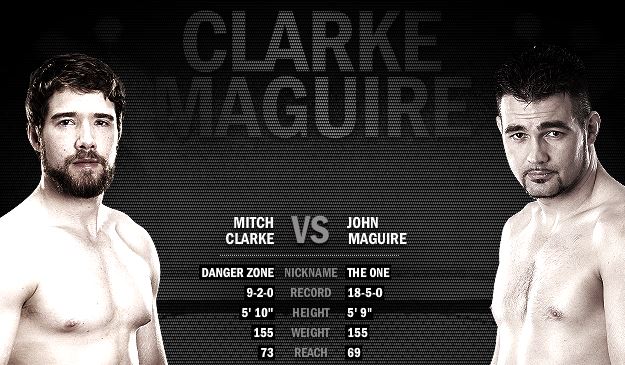 An interesting matchup will be taking place on the Facebook prelims at UFC 161 as Mitch Clarke (9-2) faces John Maguire (18-5) in what could very well be a fight for employment. The event will be taking place at the MTS Centre in Winnipeg, Manitoba, Canada, on June 15.

Both of these men have lost their last two fights in a row and will need a win to ensure that they are not cut by the UFC. As we have seen in recent months, three straight losses almost certainly means you will have to begin searching for a new job.

British fighter John Maguire joined the UFC back in 2011, facing Justin Edwards in his promotional debut at UFC 138, which took place in Birmingham, England on November 5, 2011. He won that bout via unanimous decision and went on to face DaMarques Johnson at UFC on FUEL TV 2 in April 2012, where he scored a second round submission victory and earned “Submission of the Night” honors.

Maguire refers to his grappling style as “Gypsy Jiu-Jisu”. Hopefully he will get a chance to test it’s effectiveness against Clarke on Saturday. Going back to the strong ground skills that earned him his first UFC wins could be the key to victory and a return to the win column. With a good performance this weekend Maguire could move on and forget his recent losses to John Hathaway and Matthew Riddle. The 30-year-old would then have a good base to begin focusing on a climb up the lightweight division.

As mentioned earlier, John will be taking on Mitch Clarke, who is no slouch on the ground. He has never been submitted and has six submission wins on his record. Clarke is on a two fight skid after being defeated by John Cholish and Anton Kuivanen during 2011/2012. He is yet to taste victory within the UFC and will no doubt hope to achieve this on June 15.