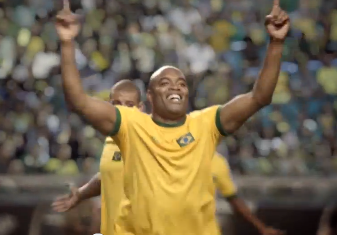 Unless your last name is Sonnen, the words ‘Anderson Silva‘ and ‘sucks’ rarely find their way into the same sentence. Silva is not only one of the most dominant active fighters in the sport of MMA, but arguably one of the best combat sport athletes of all time. We’re talking about a man that knocked out Forrest Griffin with an offhand, backpedalling, paw. Yes, the same Forrest Griffin that gave us this. The Spider’s prowess inside the cage has reached near mythical proportions, and rightfully so.

Yet, as incredible as Silva is in the Octagon, he is absolutely atrocious at soccer. OK, so an MMA fighter can’t play soccer, so what?

Anyone familiar with Brazilian culture will tell you that soccer is life to the South American nation. Babies are born with soccer balls in their cribs and their local club team’s jersey draped over them. This is the country that brought the world the likes of Pele, Ronaldo, and Ronaldinho all while amassing more World Cup victories than anywhere else in the world. A Brazilian boy who can’t dribble a soccer ball is like a bird without wings… I mean, sure it’s still a bird, but the other birds in the nest definitely look at it funny.

Luckily for us, ever the good sport, Silva has given us a peek into an alternate universe in which he decided to use his feet to score goals instead of front kicking opponents in the nose… Spoiler alert: it’s not pretty.