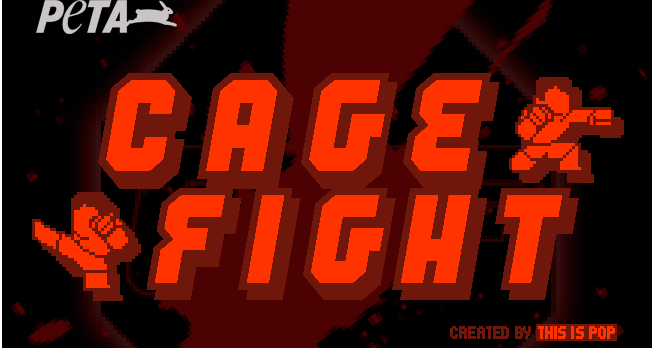 People for the Ethical Treatment of Animals (PETA) has once again teamed up with the MMA community to raise awareness about animal testing. A large number of professional fighters abstain from eating animal products, and in the last five years a host of fighters have come forward to do promotional work including the likes of former UFC light heavyweight champion Tito Ortiz, outspoken vegan Mac Danzig, and former Strikeforce middleweight champion Jake Shields, who in 2011 won the Libby Award for “most animal-friendly athlete”.

PETA’s latest MMA collaboration allows players to take control of an 8-bit Aaron Simpson, Jake Shields, or Georgi Karakhanyan to free caged animals and lay waste to nefarious, cleaver-wielding scientists in a virtual testing lab that looks more like a deleted scene from Hostel than an environment for legitimate scientific inquiry to be taking place.

Regardless of your opinions of animal testing or PETA, it’s undeniably a pretty fun way to kill a lot of time. Check it out for yourself, if only because you’re kinda curious as to what Arianny Celeste looks like after being given the 8-bit treatment (yes, that did sound a lot worse than it should have): Play PETA Cage Fight below: