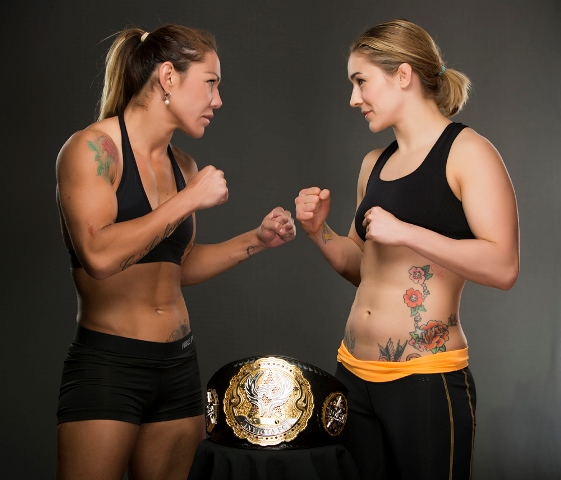 “Invicta FC 6: Cyborg vs. Coenen 2” will be held Saturday, July 13, at Ameristar Casino Hotel in Kansas City, Mo. The 13-fight card will be headlined with two championship bouts including Cris Cyborg taking on Marloes Coenen in the main event for Invicta’s inaugural 145-pound title, and reigning 115-pound champion Carla Esparza puts her title on the line against undefeated Ayaka Hamasaki in the co-main event.

For those looking to attend the all women’s MMA card in Kansas City, tickets starting at just $35 are now available online at TicketFly.com.

Cyborg and Coenen fought once before in January 2010 and it ended with Cyborg stopping Coenen via TKO at 3:40 of the third round. Since then Coenen has gone 4-1, racking up submission wins over the likes of Sarah Kaufman, Liz Carmouche, and most recently, Fiona Muxlow.

Coenen appeared on the inaugural Invicta FC card in April 2012, winning a unanimous decision over Romy Ruyssen. Miesha Tate handed Coenen her only loss since her first bout with Cyborg, stopping her with a fourth round submission in July 2011 to win the Strikeforce women’s bantamweight title.

Cyborg has fought three times since she and Coenen first clashed, and to absolutely no one’s surprise she won all three of those fights via (T)KO, stopping Jan Finney and Hiroko Yamanaka in Strikeforce, and stopping Fiona Muxlow at Invicta FC 5 in April of this year.

In December 2011 Cyborg’s win over Yamanaka was overturned to a No Decision after a post-fight urinalysis came back positive for steroids. She was also fined $2,500, suspended for one year and stripped of her Strikeforce title.

Hamasaki has fought once inside the Invicta cage thus far, submitting Lacey Schuckman via armbar in the third round at Invicta FC 2 last July. However, the Japanese submission specialist brings with her an impeccable reputation as the unbeaten Jewels 115-pound champion.  This will be only her second bout outside Japan, so it will be interesting to see how she continues to stack up against Invicta’s best.

Other main card bouts include: