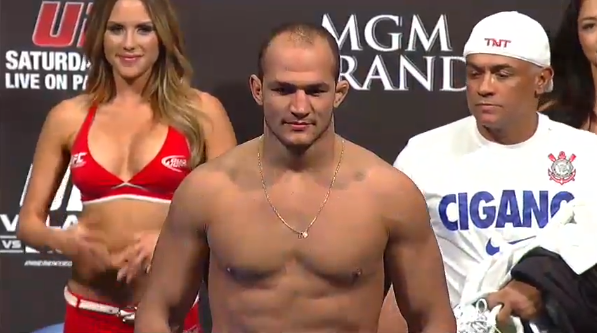 The UFC 160 event lived up to the hype on Saturday night with some outstanding fights.

There were four fighters who took home some extra bonus money for their performances on Saturday night.

Junior dos Santos and Mark Hunt took home “Fight of the Night” honors for their back and forth war on Saturday night. Dos Santos and Hunt engaged in a mostly striking affair with dos Santos getting the better of Hunt most of the night. However, dos Santos rocked Hunt with a left hook before landing a spinning head kick that put Hunt down for the count. Dos Santos followed up with a couple of punches for good measure before the referee could stop the fight.

Glover Teixeira took home “Submission of the Night” honors for his first round submission win over James Te Huna. The two  exchanged a couple of times before Teixeira locked onto a guillotine choke and pulled guard to force Te Huna to tap early in the fight.

TJ Grant took home “Knockout of the Night” honors for his first round KO win over Gray Maynard. Grant took just over two minutes to put Maynard away and will now face Ben Henderson for the UFC lightweight title later this year.

Stay tuned to ProMMAnow.com for more UFC 160 news and coverage.