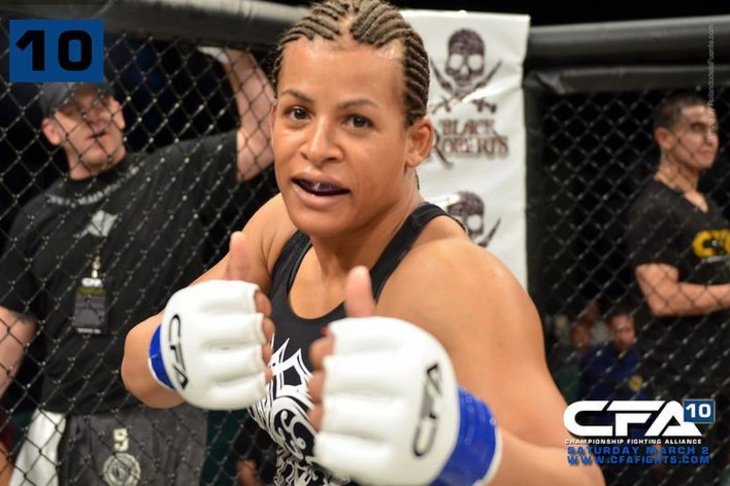 Fallon Fox makes her return to the cage for the first time since it was publicly revealed she is a transgender fighter who was born as a man but now lives and fights as a woman.

Championship Fighting Alliance 11 aka “The Fallon Fox Show” takes place this evening at the BankUnited Center in Coral Gables, Fla. and airs LIVE on AXStv starting at 9 p.m. ET.

The other women’s tournament semifinal was canceled after Anna Barone was unable to make weight (11 lbs. over) and pulled from the bout. Her opponent, Ashlee Evans-Smith gets a bye to the finals.

ProMMAnow.com (www.prommanow.com) will provide LIVE results during the AXStv broadcast. We will provide play-by-play commentary for the co-main and main events.

Round 2 – Jones checks a kick. Leg kick Fox. Side kick knocks Jones down but she gets right up, brief clinch, Jones backs out. Jones using nice footwork and jabs. Fox slow and flat footed. Shoots from outside, stuffed. Jones went to touch gloves after getting eye poked and Fox cheap shots her with a punch. Brief clinch, Jones backs out. Right from Fox. Fox gasping for air. Body jab from Jones. Inside leg kick Fox, outside leg kick. Left from Jones. Fox shoots, stuffed. Scramble and Fox ends up on top inside full guard. Elbow from Fox, another. Corner calling her to pass. Jones kicking her back as Fox stands over her. Fox dives in with a punch and misses. Back inside guard. Jones pushes her off. Right from Fox. Fox lands a right as she dives in, now in half guard. Fox lands another right as she dives back in. Now in half guard, Jones landing a couple short elbows off her back. 10-9 Fox.

Round 3 – Leg kick Fox, again. Again. Body jab from Jones. Front kick Fox, head kick attempt. Despite being gassed Fox still winning just on brute force. Fox muscles a takedown, inside full guard. Any talks of her fighting Cyborg is out of the question at this point. She’d get mauled. Fox postures up with a right hand. Half the round down. Jones looks for an armbar, loses position and ends up with Fox in side mount, Fox locks up a north-south choke, then puts her knee on her throat to shut off both arteries and Jones taps out. It’s a mixed reaction for Fox boos and applause.

Fox will face Ashlee Evans-Smith in the tournament finals

Round 1 – Jab from Kyle, Wiuff swings and misses. A straight short right on the chin stuns Wiuff, but a left hook follows that catches Wiuff behind the head and Wiuff goes down. He rolls to his back trying to cover up. He’s done. Kyle tries to tell him he’s out, but he lets him go ahead and land a big hammerfist to the chin and now he’s really out. POWER!! Wiuff still flat on his back after several moments. Kyle is cursing at the referee for not stopping the fight earlier. They have an airbag giving Wiuff oxygen. He’s still on his back. Now he’s sitting up. Wiuff is finally back to his feet. This is fourth loss in a row. He’s nearing 90 fights in his career and has suffered some bad KO’s in his time. You figure it out.