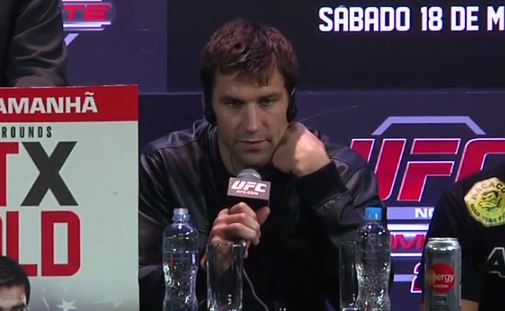 To say that Luke Rockhold looked disappointed following his loss to Vitor Belfort on Saturday night would be an understatement. At the UFC on FX 8 press conference, Rockhold the former Strikeforce middleweight champion, looked both despondent and frustrated as he sat in front of the media post-fight.

It’s hard not to have some sympathy for Rockhold, who was making his UFC debut fighting in the main event against one of the best guys in the world. Luke has only  been defeated once before in his professional MMA career and that was back in November 2007, so it was quite a shock to see him beaten in such spectacular fashion. Many people had high expectations for Rockhold in this fight, including himself, but maybe this created too much pressure in the back of his mind.

At the UFC on FX 8 post-fight press conference a member of the media asked Luke Rockhold if he felt like he had lost a title as he was clearly sad and upset. Here is what he said in response:

“It doesn’t feel good. I haven’t lost in a long time, I don’t like loosing, you know I train to win and I came to win. It definitely doesn’t feel good. I lost to one of the best guys in the world and he hit me with something pretty spectacular. I don’t really think about anything right now. I just want to get back in, fight, and beat someone up. That’s all I’m really focussed on. Good job by Vitor, what can I say.”

Rockhold clearly wants to get back into the octagon as soon as possible and redeem this loss. I wouldn’t be surprised if Luke feels that he has something to prove to the UFC and himself. The sunken feeling that you get after loosing a fight will eventually clear and Rockhold will be able to shift his focus onto getting back in the gym and improving. He is still undoubtedly one of the top guys in the world and has a lot to offer in the form of exciting matchups within the UFC.