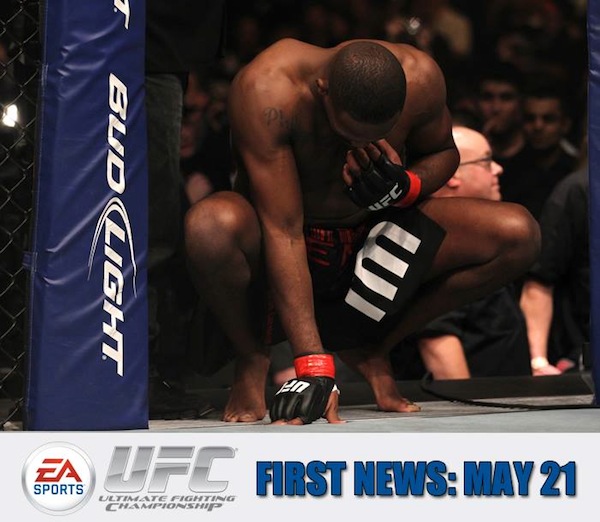 Nerds, geeks, video game heads, you will get an update on the next edition of the UFC video game on Tuesday. May 21 is not only the day Microsoft unveils plans for their next-gen XBOX, but a first look at the new UFC game is also expected.

Check out the teaser from EA Sports:

Retweet if you're pumped for the first news on @EASPORTSUFC coming tomorrow (May 21)! pic.twitter.com/lmRg7Q336A

Looks like we might be able to guess who’s getting the cover — and I bet his name rhymes with Tom Stones.

The next-gen XBOX event is being held Tuesday in Washington and will showcase footage of upcoming next-gen titles including games like Call of Duty: Ghosts and FIFA 14. A live stream of the event will be broadcast on www.xbox.com starting at 10 a.m. PT.

Honestly, I’m pretty excited for a new XBOX. Hopefully, Microsoft invests in quality hardware from the get-go this time around. I personally went through four or five consoles of the current version.

No official release date has been announced for the EA Sports UFC game — maybe that will come on Tuesday — however, latest reports have indicated it will be sometime in 2014.