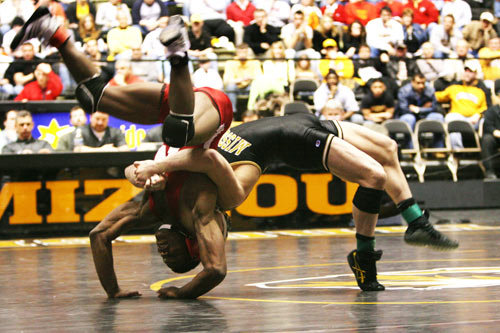 NEW YORK, May 17, 2013 – A landmark day of wrestling and international cooperation was capped by an historic evening of celebration and philanthropy on Wednesday as USA Wrestling and Beat The Streets Wrestling, Inc., a youth development organization that believes wrestling is the superlative tool for nurturing boys and girls into capable young men and women, teamed to raise a record of $1.5 million for the organization. It began with “The Rumble on the Rails,” a pair of dual meets featuring top squads from USA, Iran and Russia, powerhouses in the sport, held at Grand Central Terminal, followed by the annual Beat the Streets Awards Gala at Bryant Park Grill.

Team USA dominated Russia on the evening card, winning eight of nine matches in an event broadcast live on Universal Sports. The USA men’s freestyle team got things rolling by sweeping all five of their matches, as Coleman Scott, Logan Stieber, Brent Metcalf, David Taylor and Jordan Burroughs earned wins. Helen Maroulis won her women’s freestyle event, and Kendrick Sanders and Ben Provisor took Greco-Roman matches, with Evgeni Saleev salvaging the final match for the Russians. Earlier in the day, Iran defeated the USA, 6-1 in a men’s freestyle dual in the same venue, with four-time NCAA champion Kyle Dake winning for the Americans.

The event showed unique cooperation between the three nations as part of the Keep Olympic Wrestling movement. Although their governments do not always agree, the wrestling leaders in these nations have a strong working relationship.

“The success of ‘The Rumble on the Rails’ and Beat The Streets Awards Gala show the strength and solidarity of the sport of wrestling, top to bottom and across international lines,” said Mike Novogratz, Beat The Streets Chairman. “The entire community has come together in support of the dual goals of regaining Olympic status in 2020 and helping Beat the Streets in its critical work of benefiting disadvantaged and at-risk youth through this great sport.”

The Gala also honored a host of athletes and contributors to wrestling during the evening. They included:

ABOUT BEAT THE STREETS
The mission of Beat the Streets is to develop the full human and athletic potential of the urban youth and to strengthen the culture of New York City wrestling. BTSW works directly with the New York City Department of Education in a public-private partnership to help New York City’s student-athletes achieve their personal and athletic goals. Through the operation of wrestling programs in middle and high schools in the five boroughs, BTSW and the DOE provide a safe, positive atmosphere in which disadvantaged and at-risk youth can learn the essential life skills of physical fitness, teamwork, and self-empowerment. The goal of fostering strong, dedicated, and optimistic kids is delivered through coaching, after-school programs, and mentoring. More information can be found at www.beat-the-streets.org.