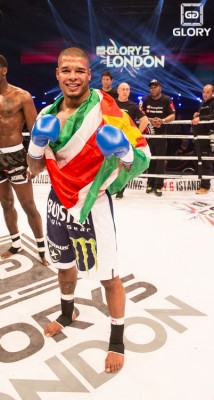 Kickboxing and MMA star Tyrone Spong (69-6-1) is set to compete in the one-night, single-elimination “GLORY 9: New York” tournament. The 29-year-old will compete against some of the world’s top light heavyweight kickboxers in the Hammerstein Ballroom at the Manhattan Center in New York City on June 22.

Here is what Glory Sports International CEO, Andrew Whitaker, had to say:

“We are excited to enter Tyrone into this historic, first GLORY championship series event in the U.S. that will determine who is physically and mentally the top athlete in kickboxing’s light heavyweight division,” Whitaker also said. “Tyrone’s recent performances in the ring have distinguished him as one of the best and most powerful martial arts fighters in the world who can showcase our great sport at its highest level,” continued Whitaker, “so we look forward to seeing him compete against the other superstars who have been enlisted for action in the tournament.”

Tyrone Spong last fought at GLORY 5 on March 23, where he defeated Remy Bonjasky, a three-time champion of the old K-1 series and one of kickboxing’s greatest athletes of all time, with a vicious right hook in the second round of their highly-anticipated main event showdown.

Blackzilian member Spong was recently forced to withdraw from a scheduled matchup against Angel DeAnda at WSOF 3 due to visa issues. Luckily, Tyrone has since been able to resolve these issues, which is why he can now compete in the GLORY tournament.

Stay close to ProMMAnow (www.prommanow.com) for all the latest GLORY news.