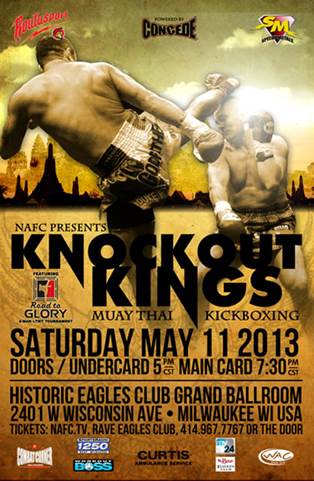 April 11, 2013 (Milwaukee, WI, USA) Few names are as synonymous with professional Kickboxing than Milwaukeean Duke Roufus. As well, even fewer Americans are as well-versed in the Thai art of kickboxing, or Muay Thai, as Duke Roufus.

So it came as no surprise when representatives of international kickboxing promotions powerhouse Glory Sports International contacted Duke in early 2013 looking for his assistance in helping Glory establish itself in the United States.

What was surprising, however, was the fact that one of the cities targeted in Glory’s plans was Milwaukee, Wisconsin, and they wanted Duke to promote their ROAD TO GLORY 8-Man Kickboxing tournament in his hometown.

It was Glory’s understanding that Milwaukee was regarded as a true hotbed for combat sports in the U.S., and Duke Roufus was the main driving force behind that image.

With lifelong international connections bringing the parties together, Duke was humbled at the opportunity to work with such a prestigious organization, and even more humbled at the fact they wanted to bring their exciting brand of stand-up fighting to southeastern Wisconsin.

This highly-anticipated show returns Duke to his roots of combat sports, the smash-mouth stand-up game of professional Muay Thai and kickboxing, where the lifelong martial artist is a former 4-Time World Heavyweight Champion.

Showcasing some of the best fighters from across Wisconsin and the Midwest, PLUS top fighters flying in from across North America for the ROAD TO GLORY USA 8-man Lightweight tournament (with a top prize of $20,000.00 going to the winner), makes this one of the most unique ring sports events ever produced in Milwaukee.

ROAD TO GLORY USA is kicking off it’s promotions with six events in America over the first five months of 2013, including the May 11th show in Milwaukee’s Eagles Club.

In addition to top regional talent battling each other in prestige bouts, each ROAD TO GLORY USA event will consist of a one-night, single-elimination, 8-man tournament in one of Glory’s six weight divisions. ROAD TO GLORY Milwaukee will showcase the country’s top Lightweight (-155 lbs) Kickboxers who will be awarded a total purse of $42,000.00.

The Milwaukee ROAD TO GLORY USA tournament champion will advance to the next level of the global tournament and be offered a one-year contract to fight for Glory internationally.

Highlights of ROAD TO GLORY USA, operated by GSI (Glory Sports International), will be distributed to over 90 countries by GSI’s media partner Total Sport Asia (http://www.totalsportsasia.com/).

The Glory World Series (www.gloryworldseries.com) is the world’s premier kickboxing fighting league, staging events across the globe and offering up to $1,000,000.00 in prize money to the winners of 16-man ‘Grand Prix’ tournaments, which are open to only the best fighters in each weight class. The fight series also includes eight-man tournaments and events with traditional, single bouts.

Advance priced tickets can be purchased online at http://nafc.tv/kokingsticketing.php, The Rave Eagles Club Box Office, by calling 414-967-7767 or from any fighter appearing on the card. Regular priced tickets will also be available at the door.

If you like your entertainment non-stop, action packed and in your face, then you’ll want to make sure you’re seated ringside Saturday, May 11th at NAFC “Knockout Kings” ROAD TO GLORY USA.

Join fighters and fans afterward at the “Knockout Kings” Post Fight Party at Brewski’s Sports Club, 304 N 76th St, Milwaukee. Remember to take the shuttle to and from the fights from Brewski’s, located directly across the street from Roufusport MMA Academy.