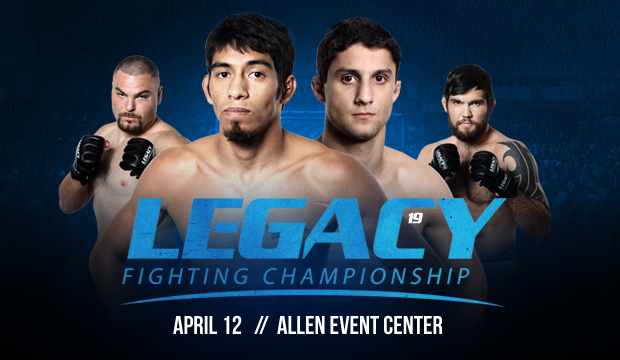 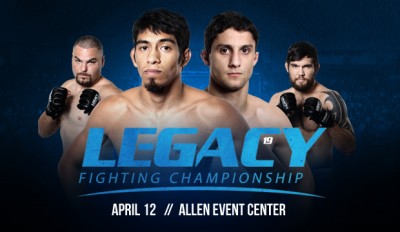 Legacy FC 19 takes place this evening  at the Allen Event Center in Dallas, Texas and is headlined with a flyweight title bout between Will Campuzano and Allan Nascimento.

Round 1 – Can Drysdale keep the streak going? Touch gloves. Front kick, high kick from Drysdale. He tries to clinch, Linderman shrugs him off. Left hook from Drysdale, shoots in and gets Linderman on his back, full mount, Linderman gives up his back after a few short shots, Drysdale locks on the body triangle and locks in the choke. Elementary my dear Linderman. Short and sweet. Drysdale improves to 6-0.

Round 1 – Thomas is said to have a cut on his head he suffered recently. couple leg kicks from Georgi. Oblique kick to the knee, another leg kick. He jumps in a standing guard, lets it go and stands. Din pushes him to the cage. Georgi escapes to center, leg kick. Punch combo from Din, big left to the jaw from Georgi. Jumping front kick from Georgi. Left to body, body head combo from Din. Georgi shoots, turns the corner and puts Din on his back, inside full guard. Georgi going after that cut with his right hand, Din keeping him tight. Georgi stand sand dives in with a big right that connects. Lays inside full guard, drops some hammerfists and elbows. Body shot, big right to the head. Georgi postures up with elbows. Din kicks his knees, stands up. Right to body from Din, left to body. Body kick from Georgi, then a right head kick, overhand right. PMN sees it 10-9 for Georgi Krakhanyan.

Round 2 – Touch gloves. Leg kick Georgi. Inside leg kick. Again. Outside leg kick, inside. Left to body, right to body from Din. Clinch against the cage, din with underhooks. Right to body from Din. Georgi turns him to the cage. Georgi drops levels. Din defends, knee to body. Georgi looks for a trip, turns Din around, Din turns him to the cage. Body shots from Din. Thai plum from Georgi, Din gets the takedown. Georgi looks for a leg lock, Din does same. Georgi moves to inside full guard. Hammerfist from Georgi. Din kicks him back and gets up, clips him with a right hand but Georgi double legs him right back to the ground with a nice shot. Georgi tries to pass guard. Small hammerfist or two from Georgi. Bell. PMN sees it 10-9 Georgi.

Georgi said after the fight his goal is to be in the UFC but he wasn’t completely happy with his performance. He did say he had been throwing up prior to the bout and not feeling well.

(125 Title) Will Campuzano vs. Allan Nascimento

Round 1 – Head kick from Allan lands. Will backs him to the cage, goes for the clinch takedown but Allan reverses and they bounce right up to their feet, clinched against cage. Right elbow from Allan. Will jumps on a guillotine but Allan fights out of it, inside full guard on top. He postures up, Will kicks him off, attacks with a kick but Will ties him up against the cage, goes for the takedown, Allan defends and they’re backed clinched against the cage. Will backs out. They trade some punches, Allan lands a straight left. Body lock takedown from Will. Now on top in half guard. Goes for mount but Allan recovers full guard. Body shots from Will. Allan goes for a leg. Will gets to this feet and Allan meets him. Will lands a big left but Allan counters and puts Will on his back. He goes in for the attack but ends up on his back. Time is called due to Allan’s toes in the cage. Ref puts them back in position with Will on top in half guard. Elbow from Will, tries to pass. Allan throws up his legs, grabs the ankle but Will escapes and Allan stands up. He lands an elbow and they exchange in the clinch until the bell. PMN sees it 10-9 for Will Campuzano.

Round 2 – Big leg kick from Campuzano. Body shot. Leg kick. Will with the takedown, ends up on top in half guard landing punches. Body shots from Will. Allan recovers full guard. Will with body shots. Allan throws his legs up, looks for a leg. Will with a nice right while Allan is holding the leg. Allan gains top control for a moment. Will regains top control, traps his left arm, now on top in half guard. PMN sees it 10-9 for Will Campuzano.

Round 3 – Body kick from Allan. Takedown from Campuzano. High guard from Allan but Will tries to pass. Allan throws up his legs. Allan gets to his knees and Will rides his back, landing punches to the body and head. Allan rolls to his back. Will trying to pass guard, ends up on top in half guard. Allan goes for a leg, they trade punches on the ground. Will tries to escape but Allan has Will’s leg in a dangerous position. Will gets out and they’re back to their feet. Allan goes for a single arm throw and ends up on his back with Will inside guard. Allan gives up his back. Will lands some big punches before the bell. PMN sees it 10-9 for Will Campuzano.

Round 4 – No one tended to Allan’s cut between rounds. Big right from Will. Clinch, knee from Allan. Will puts him on his back, inside full guard. Big elbows from Will. Another. Allan tries to hold on but continues to take shots. Will stands up, eats an up kick. Allan gives up his back and Will smashes him with punches to the side of the head and to the chin. Ref calls time for shots to the back of the head. Ref said he had warned him. They give Allan 5 minutes to recover. He wasn’t even hurt and they continue. Big leg kick from Will buckles the leg. Right from Allan but Will puts him on his back. Will on top in half guard, drops an elbow. Allan gets to his knees and Will lands punches to his head, knee to the ribs. Will takes top position landing punches. Stacks Allan with half a minute to go. Allan gets to his knees, takes an elbow to the side of the head, a big punch, hammer fist. PMN sees it 10-9 for Allan due to the point deduction.

Round 5 – Big leg kicks and a takedown from Campuzano. Takes top control with punches. Allan covers up. He goes for an ankle as Will stands and pulls out, dives in with a big left hand, now inside guard, he passes to side mount. Allan gives up his back, tries to hold wrist control. Eats some punches to the head and body. He rolls and goes for an arm, belly down, Will rolls out of it. Allan on his knees as Will rides his back with punches to the head and body. Allan tries to maintain wrist control. More body shots from Will. Will takes top control with half guard before the bell. PMN sees it 10-9 and 49-45 for Will Campuzano.