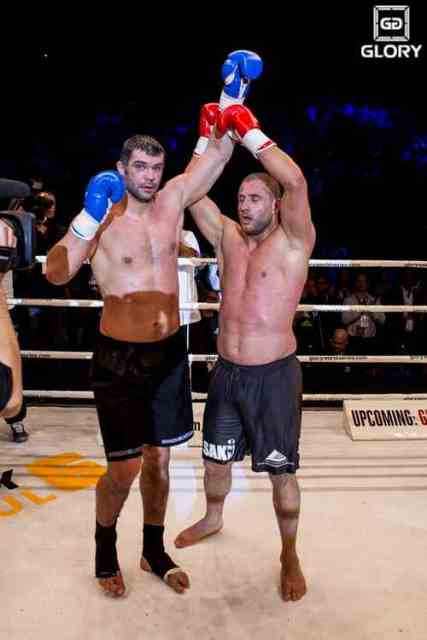 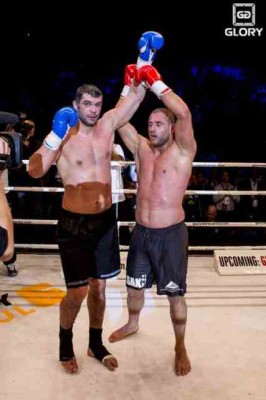 In a thrilling, highlight reel performance, Gokhan Saki (80-16, 56 KOs) of the Netherlands scored two knockdowns en route to a second round TKO of rival, top-ranked superstar Daniel Ghita (46-9, 35 KOs) of Romania in the main event the GLORY 6 Istanbul kickboxing mega-card at Ülker Sports Arena on Saturday, April 6, live on GloryWorldSeries.com.

Saki, who had defeated Ghita 28 months ago by way of unanimous decision, came out of the gates looking to close the distance between Ghita who, at 1.94 meters/6-foot-4, stands .11 meters/4 ½ inches taller than Saki.

Saki caught an attempted kick to the body and dumped Ghita, left arm first, to the canvas, putting Ghita in a noticeable amount of pain.  Ghita shook off the effect of the throw well, though, scoring with a pair of strong round kicks before the first round came to a close.

In the second round, Ghita unloaded more round kicks to the body and leg of Saki before Saki unleashed a vicious flurry of punches and dropped Ghita with a looping right hook.  Ghita made it to his feet, but Saki put his opponent down for a second time with a left hook.

Badly hurt, Ghita surprisingly beat the referee’s count.  Saki closed in once again and dished out more punishment with his hands.  The referee stepped in and stopped the contest, giving Saki the TKO victory.

In the heavyweight co-main event, Mourad Bouzidi of Tunisia got off to a quick start in the first round of his matchup with Fabiano Cyclone of Brazil, hurting Cyclone with Bouzidi’s left hook and body attacks.

In the outset of the second frame, Cyclone came out swinging, but was slowed down by Bouzidi’s counter-offensive.  Bouzidi dropped Cyclone with a combination to the body and, after Cyclone made it to his feet and the fight resumed, Bouzidi again went on the attack with a leg kick, prompting Cyclone’s corner to throw in the towel.