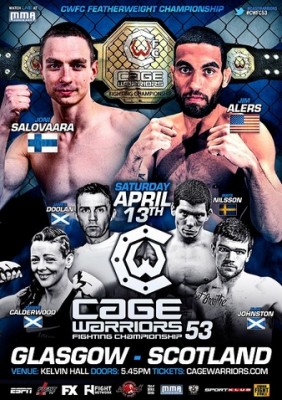 Jim Alers captured the vacant Cage Warriors featherweight title in the main event at Cage Warriors 53 on Saturday night. He defeated Joni Salovaara with a triangle armbar submission in the fourth round of the fight. The event took place at Kelvin Hall in Glasgow, Scotland, on April 13.

In the co-headliner, Joanne Calderwood scored an impressive first round TKO victory over Sally Krumdiack, which brings the Glasgow native’s undefeated streak to six.

Also on the card, Mats Nilsson showed a solid ground game on his way to securing a unanimous decision victory over Chris Scott, and Jason Ball picked up a first round submission victory over Jason Cooledge.

At the start of the fight Alers was able to get Salovaara to the ground and begin working from the guard. He moved from the guard, into side-control and then eventually secured full mount. Salovaara tried to escape by rolling out, but Alers took his back and made a rear-naked choke attempt. Salovaara did well to defend the submission attempt and survived ongoing pressure from Alers until the end of the round.

Both men exchanged on the feet for the majority of the second round. Alers scored a take-down, but the referee stood the fighters back up due to inactivity. They then went back and forth until the round ended.

In the third round the fighters continued the stand-up battle. Alers managed to score a take-down and take Salovaara’s back. Alers worked for the rear-naked choke, but Salovaara was able to defend and move into Alers’ guard before the found came to a close.

At the start Nilsson scored a big take-down and worked from the guard for the entire round.

In round two Scott began by throwing some strikes, then Nilsson began working Scott against the cage. He scored a take-down, but Scott was able to get back to his feet. Nilsson scored another take-down and began to work on the ground.

Round three was much more of a stand up war with both fighters going back and forth with their striking. Just as Scott looked to be opening up with his striking Nilsson was able to land a punch that rocked Scott and dropped him to the ground. Scott recovered well and the guys exchanged strikes once more. With moments left in the round Nilsson scored a nice take-down.

The fight began and Cooledge started by pressing Ball against the cage. They separated briefly allowing Ball to work some striking. Cooledge scored a take-down, but Ball reversed and took Cooledge’s back. He soon secured a rear-naked choke and gave Cooledge no option but to tap.

The fighters began the first round going back and forth with their striking. Neil Seery landed a strong body kick, which clearly hurt Marin and dropped him to the ground. Seery moved in to finish, but the referee called a stop to the action preventing any further punishment.

Some of the significant moments in round one included a nice uppercut by James Pennington, which dropped Doolan to the ground. Doolan recovered quickly, then Pennington moved in and began to work on the ground. Doolan managed to escape and attempt a heel hook submission, but Pennington escaped. Pennington also landed an illegal elbow to the back of Doolan’s head and suffered a point deduction.

The second round began with a guillotine choke attempt from Pennington, but Doolan was able to defend. Pennington worked from the guard for the majority of the round, then towards the end Doolan was able to reverse the position. Doolan attempted to move into full mount, but Pennington rolled out and avoided it.

At the start of round three Doolan shot in for a take-down, then Pennington pulled guard. Shortly after that Pennington secured an armbar, which forced Doolan to tap.

In the first round Jean N’Doye was the more dominant fighter with both his striking and submission game. It seemed like he had secured a tap from a guillotine choke attempt, but in a moment of confusion the referee didn’t call it. He was then able to secure a head and arm choke, but the round came to an end before he could get the tap from Edgeworth.

The second round began with N’Doye scoring an early take-down. He was able to take Edgeworth’s back and lock in a rear-naked choke, which gave Edgeworth no option but to tap.

Mark Connor was able to control Joe Laurence on the ground for the majority of the first round.

In the second round we saw much of the same thing with Mark Connor working from within Laurence’s guard for most of the round.

Joe Laurence started the third round off with a take-down of his own, but Connor was able to get back to his feet. Connor responded with a take-down, transitioned into full mount and was able to land some heavy strikes. Laurence turned to his front in an attempt to avoid punishment, but Connor continued to throw strikes to the head. They separated with Connor on his feet and Laurence on his back, then Connor was able to drop back down into full mount where he began to land even more heavy strikes. Once again Laurence tried to avoid further damage by turning to his front, but after Connor had thrown a few more head-shots the referee called a stop to the action.