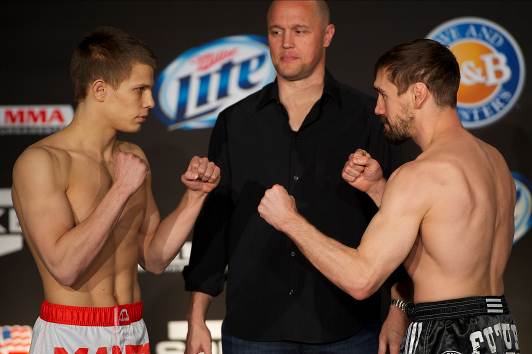 [ads2]
The fighter weigh-ins for Bellator 93 are in the books and all fighters made weight without issue. Competing in the Season 8 lightweight tournament finals, Marcin Held weighed in at 155.9 pounds, while his opponent, Dave Jansen weighed in at 155.8 pounds.

Held vs. Jansen will headline Bellator 93 Thursday evening, March 21, at The Androscoggin Bank Colisee in Lewiston, Maine. The event will broadcast LIVE on Spike TV starting at 10 p.m. ET, with the prelims streaming LIVE on Spike.com at 7:30 p.m. ET.

UFC vet Marcus Davis will make his return to action on this card for the first time since Oct. 2012. Davis will face the always exciting Waachiim Spiritwolf in a welterweight bout that’s sure to deliver for MMA fans who appreciate a good stand-up war — which I think is about all of them. Davis weighed in at 170.5 pounds, while Spiritwolf weighed in at 170.6 pounds.

The full results from the Bellator 93 weigh-ins are as follows: